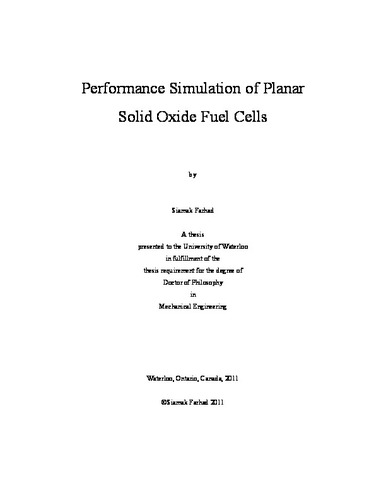 The performance of solid oxide fuel cells (SOFCs) at the cell and system levels is studied using computer simulation. At the cell level, a new model combining the cell micro and macro models is developed. Using this model, the microstructural variables of porous composite electrodes can be linked to the cell performance. In this approach, the electrochemical performance of porous composite electrodes is predicted using a micro-model. In the micro-model, the random-packing sphere method is used to estimate the microstructural properties of porous composite electrodes from the independent microstructural variables. These variables are the electrode porosity, thickness, particle size ratio, and size and volume fraction of electron-conducting particles. Then, the complex interdependency among the multi-component mass transport, electron and ion transports, and the electrochemical and chemical reactions in the microstructure of electrodes is taken into account to predict the electrochemical performance of electrodes. The temperature distribution in the solid structure of the cell and the temperature and species partial pressure distributions in the bulk fuel and air streams are predicted using the cell macro-model. In the macro-model, the energy transport is considered for the cell solid structure and the mass and energy transports are considered for the fuel and air streams. To demonstrate the application of the cell level model developed, entitled the combined micro- and micro-model, several anode-supported co-flow planar cells with a range of microstructures of porous composite electrodes are simulated. The mean total polarization resistance, the mean total power density, and the temperature distribution in the cells are predicted. The results of this study reveal that there is an optimum value for most of the microstructural variables of the electrodes at which the mean total polarization resistance of the cell is minimized. There is also an optimum value for most of the microstructural variables of the electrodes at which the mean total power density of the cell is maximized. The microstructure of porous composite electrodes also plays a significant role in the mean temperature, the temperature difference between the hottest and coldest spots, and the maximum temperature gradient in the solid structure of the cell. Overall, using the combined micro- and micro-model, an appropriate microstructure for porous composite electrodes to enhance the cell performance can be designed. At the system level, the full load operation of two SOFC systems is studied. To model these systems, the basic cell model is used for SOFCs at the cell level, the repeated-cell stack model is used for SOFCs at the stack level, and the thermodynamic model is used for the balance of plant components of the system. In addition to these models, a carbon deposition model based on the thermodynamic equilibrium assumption is employed. For the system level model, the first SOFC system considered is a combined heat and power (CHP) system that operates with biogas fuel. The performance of this system at three different configurations is evaluated. These configurations are different in the fuel processing method to prevent carbon deposition on the anode catalyst. The fuel processing methods considered in these configurations are the anode gas recirculation (AGR), steam reforming (SR), and partial oxidation reformer (POX) methods. The application of this system is studied for operation in a wastewater treatment plant (WWTP) and in single-family detached dwellings. The evaluation of this system for operation in a WWTP indicates that if the entire biogas produced in the WWTP is used in the system with AGR or SR fuel processors, the electric power and heat required to operate the plant can be completely supplied and the extra electric power generated can be sold to the electrical grid. The evaluation of this system for operation in single-family detached dwellings indicates that, depending on the size, location, and building type and design, this system with all configurations studied is suitable to provide the domestic hot water and electric power demands. The second SOFC system is a novel portable electric power generation system that operates with liquid ammonia fuel. Size, simplicity, and high electrical efficiency are the main advantages of this environmentally friendly system. Using a sensitivity analysis, the effects of the cell voltage at several fuel utilization ratios on the number of cells required for the SOFC stack, system efficiency and voltage, and excess air required for thermal management of the SOFC stack are studied.