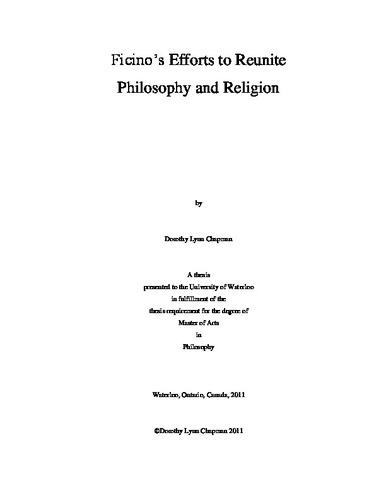 Marsilio Ficino (1433 to 1499) was the first Renaissance philosopher to have access to the full Platonic corpus. He desired to use these ancient writings, plus faith, scripture, and reason to reunite religion and philosophy into one mutually supportive system, and was perhaps motivated to do so by circumstances arising from the era in which he worked, his life, context and writing style. His background and motivations are reviewed, followed by an examination of his philosophical arguments about God's five main attributes: existence, simplicity, goodness, omniscience, and omnipotence. Finally the divine/human relationship is examined using the uniqueness of the divine's relationship with humans, divine illumination, hierarchies and love. This assessment of the Godly attributes and the divine/human relationship finds that, although Ficino did use Platonic ideas that were new to the Renaissance period, his failure to construct strong philosophical arguments made his work ultimately less enduring than that of his contemporaries. My transcription of the 1495 edition of Ficino's 'De raptu Pauli' is included an as appendix.