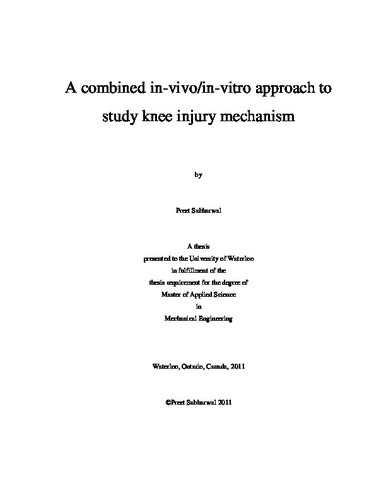 The anterior cruciate ligament (ACL) stabilizes the knee during various sporting activities and has great importance as the knee relies entirely on the ligaments and muscles for stabilization. The ACL commonly gets injured during sports activities such as basketball, soccer, and football. In the United States over 80,000 ACL injuries occur every year. There has been decades of research performed on ACL injuries regarding the injury mechanisms of non-contact ACL injuries, but yet they are still not well understood. This is mainly because trials and tests cannot be conducted on live subjects to understand the injury mechanisms. Existing in-vivo and in-vitro studies in the literature do not relate the effects of dynamic knee muscle forces and kinematics of sports activities with the strain in the ACL. In this thesis, in-vivo and in-vitro approaches are combined to quantify the effects of muscle group forces on ACL strain during jump landing. This is done by first obtaining muscle force profiles of the knee by performing motion capture and inputting the ground reaction forces and kinematics into a musculoskeletal model. Using the muscle forces and a six axis sagittal plane dynamic knee injury simulator the jump landing simulation can be performed. Six electromechanical actuators controlled by a multi-axis control system apply dynamic muscle forces at the insertion sites of the hamstrings, quadriceps, gastrocnemius, and a hip moment to simulate the hip flexors. The ACL strain is measured using a differential variable reluctance transducer mounted on the ACL. Our results show that the simulator is able to successfully perform jump landing. The muscle force-time profiles tracked the input very well. The ACL strain from our studies fell within a reasonable level compared to data from other studies of jump landing. This simulator has proven to be successful in simulating high-risk motions.