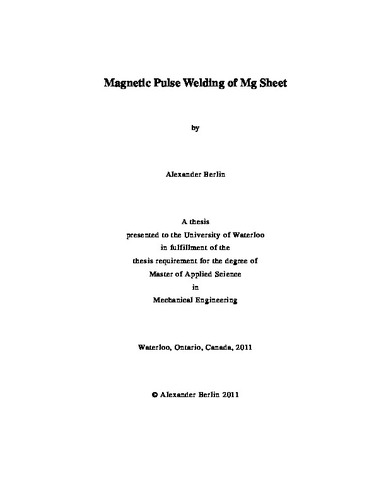 Because of its low density and high strength, magnesium (Mg) and its alloys are being sought after in the automotive industry for structural applications. Although many road-going cars today contain cast Mg parts, in the fabrication of chassis structural members the wrought alloys are required. One of the challenges of fabrication with wrought Mg is welding and joining the formed sheets. Because of the commonly observed difficulties in fusion welding of Mg such as hot cracking and severe Heat Affected Zone (HAZ), this work aimed to establish the feasibility of the solid-state process Magnetic Pulse Welding in producing lap welds of Mg sheet. Mg AZ31 alloy sheets have been lap-welded with Magnetic Pulse Welding (MPW), an Impact Welding technique, using H-shaped symmetric coils connected to a Pulsar MPW-25 capacitor bank. MPW uses the interaction between two opposing magnetic fields to create a high speed oblique collision between the metal surfaces. The oblique impact sweeps away the contaminated surface layers and forces intimate contact between clean materials to produce a solid-state weld. Various combinations of similar and dissimilar metals can be welded using MPW. Other advantages of MPW are high speed, high strength, and the possibility of being mounted on a robotic arm. The present research focuses on the feasibility and mechanical performance of an MPW weld of 0.6 mm AZ31 Mg alloy sheets made in a lap joint configuration. Tensile shear tests were carried out on the joints produced. Load bearing capacity showed linear increase with capacitor bank discharge energy up to a certain value above which a parabolic increase was seen. Strength was estimated to be at least as high as base metal strength by measuring the fracture surface area of selected samples. The fracture surface of samples welded at higher discharge energy showed two regions. In the beginning of the bond a platelet-featured fracture brittle in appearance and a ductile, micro-voiding fracture in the latter part. The joint cross section morphology consisted of a flattened area that had two symmetric bond zones 1 mm wide each separated by an unbonded centre zone ~3mm wide. Reasons for the morphology were presented as a sequence of events based on the transient nature of the oblique collision angle. The interface microstructure was studied by optical and electron microscopy. Examination of the bonds has revealed sound and defect free interfaces. No microcracking, porosity, resolidification, or secondary phase formation was observed. Metallographic examination of the unbonded centre zone revealed anisotropic deformation and a lack of cleaning from the interface. This zone is formed as a result of normal impact in the initial stage of collision. The bond zone interface of the joint was characterized by a smooth interface consisting of refined grains. In samples welded at higher energy interfacial waves developed in the latter half of the bond zone. Transmission electron microscopy (TEM) of the bond zone revealed a continuous interface having an 8-25 μm thick interlayer that coincided with the waves and had a dislocation cell structure and distinct boundaries with adjacent material. Equiaxed 300 nm dynamic recrystallized (DRX) grains were found adjacent to the interlayer as well as other slightly larger elongated grains. The interlayer is thought to be formed in plasticized state at elevated temperature through severe shear strain heating. The interlayer corresponds to a ductile fracture surface and, along with the interfacial waves, is responsible for the joint’s high strength.