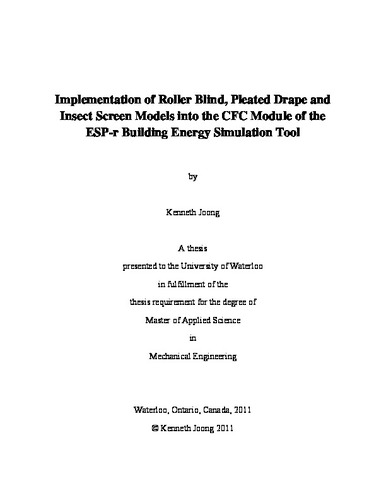 The concern of increasing energy consumption with depleting energy resources is ever growing. Though the solution to this problem lies in part in renewable energies, it is becoming increasingly clear that sustainable building design also plays a critical role. Controlling solar gain, for example, can greatly reduce the cooling energy consumption and lowering the peak cooling load. Having the ability to model these effects can have a substantial impact on the sizing of equipment and further reduce operational costs of a building. As a result, renewed interest has been invested by researchers and industry to promote the development and use of building simulation tools to aid in the design process. Efforts at the University of Waterloo’s Advanced Glazing Systems Laboratory have resulted in a set of shading device models, with emphasis on generality and computational efficiency, tailored for use in building simulation. These models have been validated with measurements at the component level and with measurements performed at the National Solar Test Facility (NSTF) on a full scale window system, giving confidence to model validity. Continued research has resulted in the integration of these shading device models into ESP-r via the Complex Fenestration Construction (CFC) module, capable of modelling multi-layer glazing and shading layer systems and greatly improving the value of ESP-r as a design tool. The objective of the current research was to implement shading device models for roller blinds, pleated drapes and insect screens to the CFC module. These would be in addition to the venetian blind model which had previously been established. A Monte-Carlo ray tracing analysis of pleated drape geometry and incident angle dependent fabric characteristics gave further confidence to the view factor or net reduction method used by the implemented models. On model implementation, a preliminary comparison was performed between a high-slat angle venetian blind, a roller drape and drapery fabric, all given the same material properties, with similar results. Further comparison was then performed using EnergyPlus shading device models to establish further confidence in the functionality of the models. Though there was some discrepancy between the results, primarily due to convective models, good agreement was found, and the effect of the shading device models on building performance was demonstrated. The successful implementation of roller blind, pleated drape and insect screen shading models to the CFC module in ESP-r has been demonstrated in the current research. It should also be noted that the convective models for indoor shading attachments is a worthwhile topic for further research, at which point it would then be beneficial to conduct further empirical validation on the ESP-r simulation.