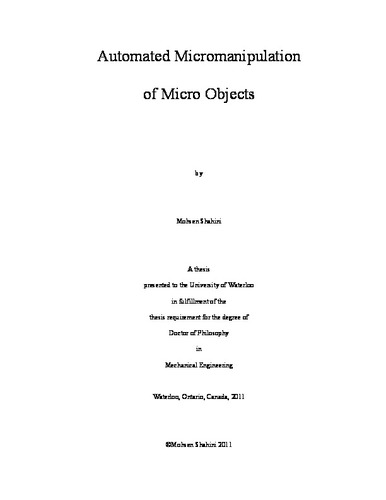 In recent years, research efforts in the development of Micro Electro Mechanical Systems, (MEMS) including microactuators and micromanipulators, have attracted a great deal of attention. The development of microfabrication techniques has resulted in substantial progress in the miniaturization of devices such as electronic circuits. However, the research in MEMS still lags behind in terms of the development of reliable tools for post-fabrication processes and the precise and dexterous manipulation of individual micro size objects. Current micromanipulation mechanisms are prone to high costs, a large footprint, and poor dexterity and are labour intensive. To overcome such, the research in this thesis is focused on the utilization of microactuators in micromanipulation. Microactuators are compliant structures. They undergo substantial deflection during micromanipulation due to the considerable surface micro forces. Their dominance in governing micromanipulation is so compelling that their effects should be considered in designing microactuators and microsensors. In this thesis, the characterization of the surface micro forces and automated micromanipulation are investigated. An inexpensive experimental setup is proposed as a platform to replace Atomic Force Microscopy (AFM) for analyzing the force characterization of micro scale components. The relationship between the magnitudes of the surface micro forces and the parameters such as the velocity of the pushing process, relative humidity, temperature, hydrophilicity of the substrate, and surface area are empirically examined. In addition, a precision automated micromanipulation system is realized. A class of artificial neural networks (NN) is devised to estimate the unmodelled micro forces during the controlled pushing of micro size object along a desired path. Then, a nonlinear controller is developed for the controlled pushing of the micro objects to guarantee the stability of the closed loop system in the Lyapunov sense. To validate the performance of the proposed controller, an experimental setup is designed. The application of the proposed controller is extended to precisely push several micro objects, each with different characteristics in terms of the surface micro forces governing the manipulation process. The proposed adaptive controller is capable of learning to adjust its weights effectively when the surface micro forces change under varying conditions. By using the controller, a fully automated sequential positioning of three micro objects on a flat substrate is performed. The results are compared with those of the identical sequential pushing by using a conventional linear controller. The results suggest that artificial NNs are a promising tool for the design of adaptive controllers to accurately perform the automated manipulation of multiple objects in the microscopic scale for microassembly.