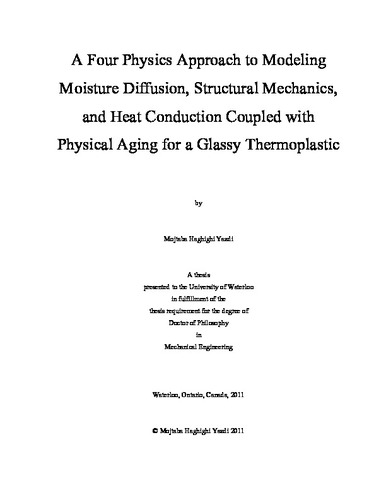 The performance of some polymeric materials is profoundly affected by long-term exposure to moisture during service. This poses problems for high precision and/or load bearing components in engineering applications where moisture-induced changes in mechanical properties and dimensional stability could compromise the reliability of the device or structure. In addition to external factors such as moisture, the material properties are also evolving due to inherent structural relaxation within the polymeric material through a process known as physical aging. Based on the current knowledge of both mechanisms, they have opposite effects on material properties. The common approach to studying the effects of moisture is to expose the polymeric material to combined moisture and heat, also referred to as hygrothermal conditions. The application of heat not only increases the rate of moisture diffusion but also accelerates physical aging processes which would otherwise be very slow. In spite of this coupled response, nearly all hygrothermal studies ignore physical aging in their investigations due to the complexity of the coupled problem. The goal of this work is to develop a numerical model for simulating the interactive effects of moisture diffusion and physical aging in a glassy polymer. The intent is to develop a capability that would also allow one to model these effects under various mechanical loading and heat transfer conditions. The study has chosen to model the response of polycarbonate/acrylonitrile-butadiene-styrene (PC/ABS), which is a glassy polymer blend that has very similar behaviour to polycarbonate. In this study, a comprehensive approach which considers four physical mechanisms – structural mechanics, moisture diffusion, heat conduction, and physical aging – has been applied. The most current analytical models in the literature usually attempt to model two or three coupled physical phenomena. To develop the four coupled phenomena model, the current work has undertaken an extensive scope of work involving experimental characterization and finite element modeling. In the experimental part of this work, seven sets of different tests were conducted to characterize the behaviour of PC/ABS exposed to moisture diffusion and accelerated physical aging. These experiments provided a comparative study between the effects of physical aging and moisture diffusion on the material’s behaviour; and at the same time, provided data for the numerical modeling. The dual glass transition temperatures (Tg) of the material were determined using two techniques: dynamic mechanical analysis (DMA) and thermo-mechanical analysis (TMA). The DMA tests provided data for studying the effects of hygrothermal aging on the Tg’s of the material and were also useful for mechanical tests such as creep and stress relaxation performed using the DMA. The Tg’s obtained using the TMA were also required for physical aging experiments using the dilatometry mode of TMA. Structural relaxation of the blend was studied by aging the material at 80 °C for 7 aging times in the TMA. These experiments gave an insight into the volume relaxation behaviour of the blend at a constant temperature. Specific heat capacity of the PC/ABS blend was also measured using another thermal analysis technique; i.e., differential scanning calorimeter (DSC), before and after test specimens were exposed to hygrothermal aging for 168 hours. The interactive effects of physical aging and moisture diffusion on the moisture uptake of the material were studied using gravimetric experiments performed at 5 different hygrothermal conditions. The experimental results were used to determine the coefficient of diffusion as well as the equilibrium moisture uptake of the samples. Furthermore, the effects of both moisture diffusion and physical aging on the mechanical behaviour of the polymer blend were investigated using stress relaxation tests. The comparison of the results of the tests performed on un-aged specimens with those of thermally and hygrothermally aged samples showed how physical aging effects competed with moisture diffusion. Also, the coefficient of hygroscopic expansion of the PC/ABS blend was determined using a so-called TMA/TGA technique. The numerical modeling of the four-coupled physics was achieved using the governing equations in the form of partial differential equations. Modeling was performed using the commercial finite element software package, COMSOL Multiphysics®. First, the uncoupled physical mechanisms of structural mechanics, moisture diffusion, and heat conduction were modeled separately to investigate the validity of the PDEs for each individual phenomenon. The modeling of the coupled physics was undertaken in two parts. The three coupled physics of structural mechanics, moisture diffusion, and heat conduction was first simulated for a gas pipe having a linear elastic behaviour. The comparison of the results with similar analysis available in the literature showed the capability of the developed model for the analysis of the triple coupled mechanisms. The second part modeled the four coupled phenomena by incorporating the experimentally determined coupling coefficients. In the developed numerical model, the material behaviour was considered to be linear viscoelastic, which complicated the model further but provided more realistic results for the behaviour of the polymer blend. Moreover, an approximation method was proposed for estimating the coupling coefficients that exist between different coupled physics in this study. It was also suggested that the anomalous moisture diffusion in the material can be modeled using a time varying boundary condition. Finally, the model was successfully verified and demonstrated using test case studies with thin thermoplastic plates. The proposed four-coupled physics model was able to predict with good accuracy the deflection of thin thermoplastic plates under bending for a set of hygorthermal test condition.