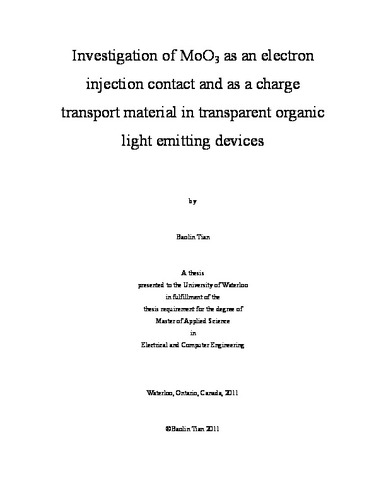 MoO3 is investigated for its utilization as a transparent cathode and as a charge transport material in transparent organic light emitting devices. As a transparent cathode, MoO3 is utilized in combination with a thin metal layer (e.g. Ag) in the form of MoO3/Ag/MoO3 (MAM) stack to enable thermal evaporable transparent cathodes. Results show that it is possible to achieve efficient electron injection from the MAM electrode into organic layers by means of incorporating a suitable Electron Injection Layer (EIL) at the interface. Results also show that a MAM electrode can exhibit high optical transmittance, amounting to about 65-80% in the 400-700nm, and a low sheet resistance (9Ω/□). A transparent OLED with a MAM cathode incorporated with a 10nm Bphen: Cs2CO3 (10%) EIL is studied. By fine tuning the MAM structure, optimal OLED performance has been achieved: a total luminance of 1300 cd/m2 (representing ~1000cd/m2 and ~300cd/m2 from the bottom and the top, respectively) at 20mA/cm2 and a corresponding driving voltage of 7.2V. The OLED exhibits a peak transmittance of ~ 90% in the 450-475 nm range, and a transmittance above 45% over the entire visible (i.e. 400-700 nm) range. As a charge transport, MoO3 is utilized in combination of various organic hole and electron transport materials in the form of mixtures. Results show that a significantly enhanced bulk conductivity of thin films of MoO3 and hole-transport organic material mixture is achieved by varying the MoO3 composition. The mixture films are fabricated in a lateral structure rather than the conventional vertical structure. Experimental results show that the conductivity of NPB: MoO3 (x) mixture films increases with the MoO3 composition before its maximum value is reached at x = 50%, which is six orders of magnitude higher than that of the intrinsic MoO3 film. With further increasing MoO3 composition, the conductivity of the mixture films decreases and approaches the value of the intrinsic MoO3. The observed improvement of the film conductivity is attributed to changed bulk and interface properties, whereas the improvement of the bulk material conductivity is the dominant factor. Similar phenomena are also observed in MoO3 thin films mixed with other hole transport materials (such as TcTa), however not in the thin film mixtures of electron transport materials (e.g., Alq3 and Bphen) and MoO3. The I-V results of the hole-only device and electron-only device show that NPB: MoO3 (50%) mixture has both enhanced electron and hole transport.