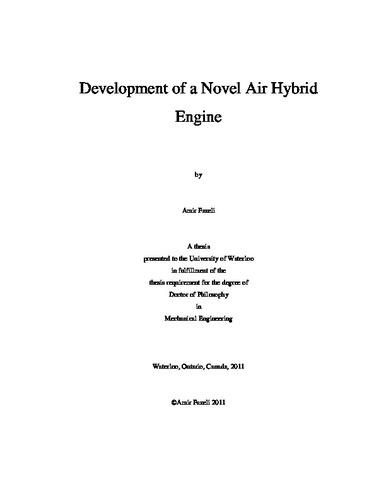 An air hybrid vehicle is an alternative to the electric hybrid vehicle that stores the kinetic energy of the vehicle during braking in the form of pressurized air. In this thesis, a novel compression strategy for an air hybrid engine is developed that increases the efficiency of conventional air hybrid engines significantly. The new air hybrid engine utilizes a new compression process in which two air tanks are used to increase the air pressure during the engine compressor mode. To develop the new engine, its mathematical model is derived and validated using GT-Power software. An experimental setup has also been designed to test the performance of the proposed system. The experimental results show the superiority of the new configuration over conventional single-tank system in storing energy. In addition, a new switchable cam-based valvetrain and cylinder head is proposed to eliminate the need for a fully flexible valve system in air hybrid engines. The cam-based valvetrain can be used both for the conventional and the proposed double-tank air hybrid engines. To control the engine braking torque using this valvetrain, the same throttle that controls the traction torque is used. Model-based and model-free control methods are adopted to develop a controller for the engine braking torque. The new throttle-based air hybrid engine torque control is modeled and validated by simulation and experiments. The fuel economy obtained in a drive cycle by a double-tank air hybrid vehicle is evaluated and compared to that of a single-tank air hybrid vehicle.