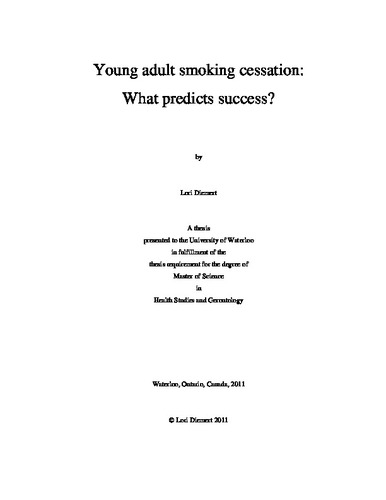 Background: Across North America, smoking prevalence is highest among young adults (YAs). Understanding the cessation behaviours of YAs is critical given their higher smoking rates; however, there is a paucity of prospective studies on YA cessation from a population-based sample of smokers. Objectives: This study characterizes younger and older adult smokers as well as identifies the rate of making a quit attempt (QA) and smoking cessation among a representative sample of younger and older adult smokers. Guided by the Social Cognitive Theory (SCT), this study also examines the interpersonal predictors of moving toward smoking cessation among YAs. Methods: Self-report data on 592 YA and 2777 older adult smokers were compiled from the Ontario Tobacco Survey baseline and six-month follow-up interviews. Smoking cessation behaviour was measured as an ordinal variable: made no attempt to quit, made a QA that lasted for less than 30 days, and successfully quit for 30 days or longer. Design-based analyses examined the characteristics of young and older adult smokers. Making a QA and smoking cessation during a six-month follow-up period were modeled according to the SCT constructs while accounting for the complex study design. Results: Young adult smokers were more likely to be men with lower levels of addiction but greater self-efficacy and an intention to quit than their older counterparts. While YA smokers were more likely to make a QA than their older counterparts (25% vs. 17%, respectively), they were no more likely to succeed (14% vs. 10%, respectively). Having an intention to quit smoking and having made two or more lifetime number of QAs predicted making a QA; the use of smoking cessation aids or resources and having knowledge that stop smoking medications make quitting a lot easier also contributed to making an attempt to quit. Self-efficacy, use of smoking cessation aids or resources and having someone to support one‘s QA were positive predictors of quitting whereas having high levels of addiction was a negative predictor of cessation. Conclusions: Young and older adults are distinct types of smokers with different personal and smoking characteristics. Different factors predicted making a QA and smoking cessation among YAs. Smoking cessation interventions for YAs should provide social support and skills to build and maintain self-efficacy to quit. It is critical to ensure YA smokers have effective smoking cessation aids and services that are easily accessible and appropriate for this population. Future research is needed to understand long-term smoking cessation and relapse in this vulnerable population.