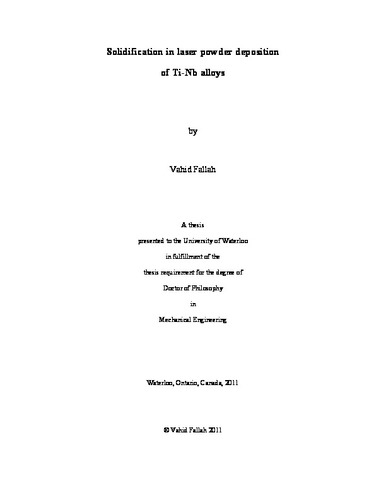 The size and morphology of the dendrite growth patterns are simulated for laser powder deposition of Ti-Nb alloys under steady-state and transient growth conditions. A phase field model using an adaptive grid technique was employed to simulate the steady-state growth of dendrites on rather small domains, in which fixed local solidification conditions are present. For simulation of dendrite growth patterns at transient conditions, a cellular automaton model was used along with a virtual front tracking technique on larger domains, containing various initial orientations of the solid-liquid (SL) interface. To obtain the required input thermal data, i.e., the temporal distribution of temperature, a finite element analysis was performed along with a novel numerical approach for the real-time addition of new deposition material in each time step, thus building the deposition geometry momentarily. Using the output of the thermal model, the motion and morphology of the SL interface was determined through tracking the isotherm of the solidification temperature. First, in this study, the appropriate set of processing parameters was found through an optimization process using a new concept, laser supplied energy Es, which combines the effects of the energy and powder density in the process. With the developed analytical/experimental procedure, crack and pore-free coatings of Ti-Nb with continuous beads were produced by examining the effects of a few sets of processing parameters, including laser power, laser scan velocity, laser beam diameter and powder feed rate. The results of the thermal model for the optimized set of parameters matched with the thermocouple temperature measurements with only ~5% deviation. The thermal model was able to predict realistic profiles for the temporal development of deposition geometry, thus predicting meaningful morphologies of the SL interface. The model output was easily treated for extraction of local processing parameters, such as the temperature gradient and solidification velocity. These data are very useful when simulating the dendrite growth patterns at steady-state conditions in directional solidification of selected regions in the microstructure. In order to define transient growth conditions, the simulated distribution of temperature can be also directly fed into the microstructure model at each solution time step. Phase field simulations of steady-state growth of dendrites during directional solidification showed a remarkable agreement with the experimental observations for the local dendrite arm spacing across the microstructure. Also qualitatively agreeing with the experiment, the simulated dendrite spacing exhibited a minimum around the mid-height region of the microstructure, which is explained by the counter effect of the temperature gradient and solidification velocity along the height of the sample. On a large domain containing different initial orientations of the SL interface, cellular automaton simulations for transient growth patterns of dendrites could reproduce most qualitative features observed in the microstructure. The dendrite arm spacing gradually decreased from the top of the microstructure. The competition was won by the dendrites growing in areas with higher cooling rates, i.e., in the regions closer to the top of the microstructure. The secondary arms of the primary dendrites, which are initially inclined on the vertical axis, grew extensively only along the overall growth direction and eventually became primary arms in some cases.