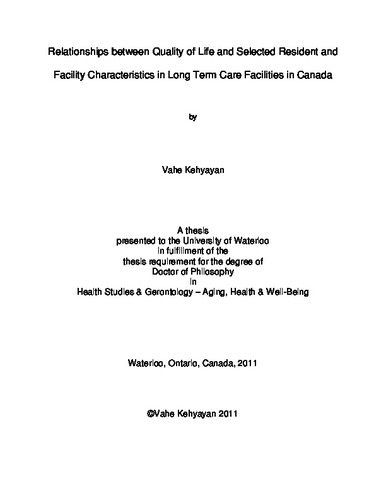 Background: Quality of life (QoL) of long term care facility (LTC) residents is being recognized as an important outcome of care by LTC providers, researchers, and policy makers. For residents, measurement of QoL is a valued opportunity to express their perception of the quality of their daily life in the LTC facility. For clinicians, self-reported QoL provides useful information in planning and implementing resident-centred care. Purpose: The purposes of this study were: (1) to examine the distributional and psychometric properties of the interRAI Self-Report Nursing Home Quality of Life Survey (interRAI_QoL Survey); and (2) to explore the relationship of selected socio-demographic and clinical characteristics of residents and LTC facility attributes with residents’ self-reported QoL. Methodology: This was a cross-sectional observational study. A convenience sample of 48 volunteer LTC facilities from six Canadian provinces was involved in this study. Nine hundred and twenty eight (928) residents agreed to participate in this study. Resident inclusion required an interRAI Cognitive Performance Scale score of 0 (intact) to 3 (moderate impairment). Residents’ self-reported QoL was measured by trained surveyors using the interRAI_QoL Survey instrument. Residents’ socio-demographic and clinical characteristics were obtained from the most recentResident Assessment Instrument –Minimum Data Set 2.0 prior to the QoL interviews. LTC facility attributes were measured by a survey form specifically designed for this purpose. Descriptive statistics were used to describe the participating LTC facilities, the sample of residents, and residents’ self-reported QoL. Psychometric tests for reliability (test-retest and internal consistency) and validity (content and convergent) were conducted. Bivariate analyses were conducted to examine the relatioships between QoL and resident and facility charateristics. Multivariate linear and logistic regression analyses were conducted to identify predictors of residents’ QoL. Results: The study confirmed the feasibility of assessing LTC facility residents’ self-reported QoL. The findings showed positive ratings of some aspects of residents’ daily lives while negative ratings in other aspects. Psychometric tests showed that the interRAI_QoL Survey instrument had test-retest reliability, internal consistency, content validity and construct (convergent) validity. Several resident and facility characteristics were associated with self-reported QoL. Religiosity and highest education level attained were significantly and positively associated with QoL. Other resident characteristics such as age, gender and marital status were not. Mild cognitive impairment, depression, aggressive behaviour, hearing impairment, bowel and bladder incontinence, and extensive assistance in activities of daily living were significantly but negatively associated with QoL. LTC facility ownership showed significant association with QoL. Residents in municipal LTC facilities followed by private LTC facilities reported higer QoL in contrast to charitable LTC facilities. Profit status, accreditation and leadership stability were not associated with QoL. Residents in rural settings reported significantly higher QoL than those in urban settings. Facility size (measured in number of beds), registered nurse hours of care, nursing staff turnover, and ratios of registered to non-registered nursing staff did not have a significant association with QoL. However, higher management hours and total hours of care had significant and positive associations with residents’ overall QoL. Multiple linear regression showed that residents’ religiosity, degree of social engagement, post secondary education, dependence in activities of daily living, and positive global disposition, and LTC facilities situated in rural settings and ownership type together accounted for 24% (adjusted R2=0.24) of the variance in overall QoL (the dependent variable). In logistic regression, low QoL was used as the binary dependent variable. Residents who were religious, were socially engaged and had a positive global disposition were less likely to report low QoL. In contrast, residents with dependence in activities of daily living and post secondary education were more likely to report low QoL. Residents in LTC facilities located in rural settings and operated by municipal or private operators were less likely to report low QoL compared to charitable facilities. Strengths and Limitations: This study had several strengths, including a sample of 928 residents who self-reported on their QoL and the use of RAI-MDS 2.0 for objective, external indicators of QoL. This study had several limitations, including response bias due to method of sample selection, inability to draw causal inferences due to study design; limited generalizability due to use of a convenience sample, lack of monitoring of surveyors for the integrity of resident interviews, and exclusion of residents with cognitive performance scale scores of more than three or inability to communicate in English. Future research should address these limitations. As well, future research should conduct more stringent psychometric analyses such as factor analysis and use multi-level modeling procedures. Implications: The findings of this study have implications for improving residents’ QoL, LTC facility programming, future research, and social policy development. Conclusion: QoL can be measured from resident self-reports in LTC facilities. Self-reports from residents may be used by clinicians to plan and implement resident-centred care. There are significant associations of residents’ QoL with select resident socio-demographic and clinical characteristics and facility attributes. Some of these resident characteristics and facility attributes may serve as predictors of QoL.