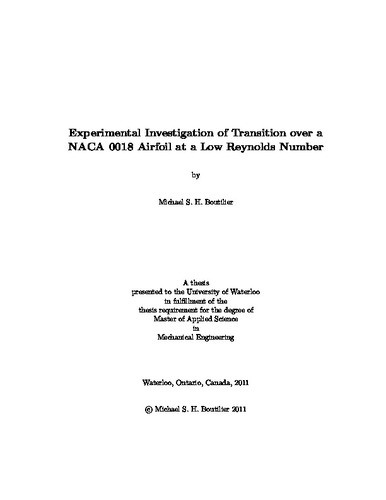 Shear layer development over a NACA 0018 airfoil at a chord Reynolds number of 100,000 was investigated experimentally. The effects of experimental setup and analysis tools on the results were also examined. The sensitivity of linear stability predictions for measured separated shear layer velocity profiles to both the analysis approach and experimental data scatter was evaluated. Analysis approaches that are relatively insensitive to experimental data scatter were identified. Stability predictions were shown to be more sensitive to the analysis approach than to experimental data scatter, with differences in the predicted maximum disturbance growth rate and corresponding frequency of approximately 35% between approaches. A parametric study on the effects of experimental setup on low Reynolds number airfoil experiments was completed. It was found that measured lift forces and vortex shedding frequencies were affected by the end plate configuration. It was concluded that the ratio of end plate spacing to projected model height should be at least seven, consistent with the guideline for circular cylinders. Measurements before and after test section wall streamlining revealed errors in lift coefficients due to blockage as high as 9% and errors in the wake vortex shedding frequency of 3.5%. Shear layer development over the model was investigated in detail. Flow visualization images linked an observed asymmetry in wake velocity profiles to pronounced vortex roll-up below the wake centerline. Linear stability predictions based on the mean hot-wire profiles were found to agree with measured disturbance growth rates, wave numbers, and streamwise velocity fluctuation profiles. Embedded surface pressure sensors were shown to provide reasonable estimates of disturbance growth rate, wave number, and convection speed for conditions at which a separation bubble formed on the airfoil surface. Convection speeds of between 30 and 50% of the edge velocity were measured, consistent with phase speed estimates from linear stability theory.