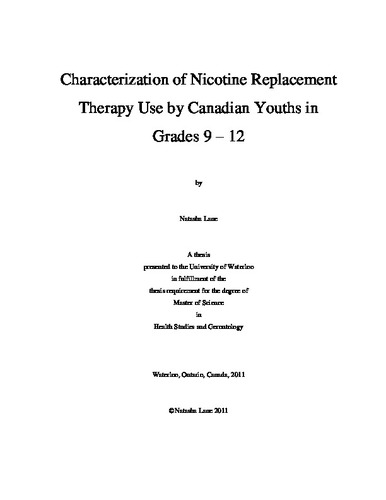 In Canada, nicotine replacement therapy (NRT) is a best practice for adult smoking cessation, but it is not recommended for use by youth smokers. Previous research has indicated that more than 20 percent of high school-aged smokers in Canada had used NRT, despite the cross-Canada requirement that youths under the age of 18 have a physician’s prescription to purchase NRT. The goal of this study was to examine both student and school-level characteristics associated with use of NRT by youths. Data from 29,296 grade 9 to 12 students who participated in the 2008-2009 National Youth Smoking Survey (YSS) were combined with Canadian census and built environment data in multilevel logistic regression models. The associations between lifetime and current NRT use with student characteristics (i.e., smoking status, social smoking connections) were examined alongside school environment factors such as urban/rural location and pharmacy density within a one kilometre radius of schools. In 2008-2009, 21.1% of youth smokers in Canada had ever used NRT and 5.1% were currently using NRT. Odds of NRT use were highest among daily smokers, boys, youths who had made multiple quit attempts, and youths who self-identified as smokers. Attending a school located within an urban area increased youths’ odds of NRT use, whereas higher density of pharmacies surrounding a school was inversely associated with NRT use. This study is the first to identify significant between school differences in NRT use. It also reveals that many youths are using NRT in the absence of a quit attempt. Further research is needed to identify school characteristics that impact NRT use, and understand how youths are accessing NRT.