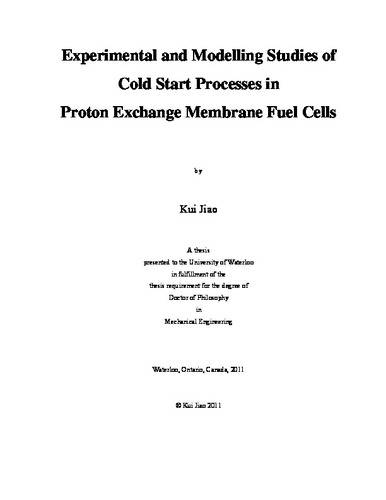 Proton exchange membrane fuel cell (PEMFC) has been considered as one of the most promising energy conversion devices for the future in automotive applications. One of the major technical challenges for the commercialization of PEMFC is the effective start-up from subzero temperatures, often referred to as “cold start”. The major problem of PEMFC cold start is that the product water freezes when the temperature inside the PEMFC is lower than the freezing point. If the catalyst layer (CL) is fully occupied by ice before the cell temperature rises above the freezing point, the electrochemical reaction may stop due to the blockage of the reaction sites. However, only a few of the previous PEMFC studies paid attention to cold start. Hence, understanding the ice formation mechanisms and optimizing the design and operational strategies for PEMFC cold start are critically important. In this research, an experimental setup for the cold start testing with simultaneous measurement of current and temperature distributions is designed and built; a one-dimensional (1D) analytical model for quick estimate of purging durations before the cold start processes is formulated; and a comprehensive three-dimensional (3D) PEMFC cold start model is developed. The unique feature of the cold start experiment is the inclusion of the simultaneous measurement of current and temperature distributions. Since most of the previous numerical models are limited to either 1D or two-dimensional (2D) or 3D but only considering a section of the entire cell due to computational requirement, the measured distribution data are critically important to better understand the PEMFC cold start characteristics. With a full set of conservation equations, the 3D model comprehensively accounts for the various transport phenomena during the cold start processes. The unique feature of this model is the inclusion of: (i) the water freezing in the membrane electrolyte and its effects on the membrane conductivity; (ii) the non-equilibrium mass transfer between the water in the ionomer and the water (vapour, liquid and ice) in the pore region of the CL; and (iii) both the water freezing and melting in the CL and gas diffusion layer (GDL). This model therefore provides the fundamental framework for the future top-down multi-dimensional multiphase modelling of PEMFC. The experimental and numerical results elaborate the ice formation mechanisms and other important transport phenomena during the PEMFC cold start processes. The effects of the various cell designs, operating conditions and external heating methods on the cold start performance are studied. Independent tests are carried out to identify and optimize the important design and operational parameters.