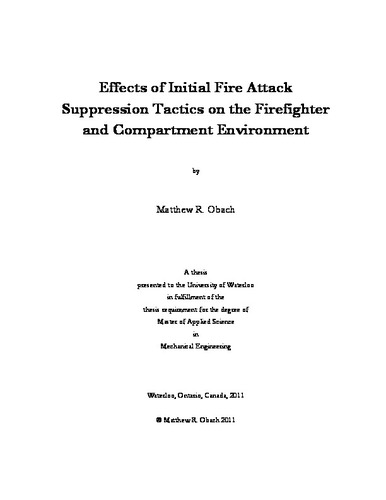 Full-scale experiments are conducted to study the effects of different water-based indirect and combination initial attack methods on the compartment environment and firefighter during compartment fire suppression, with an aim toward improving manual fire suppression effectiveness and firefighter safety. Hot layer temperatures typical of room fire conditions are developed in the test compartment using wood cribs. Five suppression methods including straight stream, penciling, continuous wide and narrow fog, and a wide angle burst method are examined for two different spray angles and nozzle pressures. Temperatures, heat flux, gas velocity, and gas concentrations are monitored for the duration of each experiment in the fire compartment, along with temperatures and gas concentrations in the area of the firefighter, just outside the compartment. Realistic fire conditions are repeatedly established in the test compartment, with each fuel load allowing up to nine suppression applications per fire. The repeatability of the compartment temperatures are demonstrated by the consistent hot layer temperature stratification in the room, along with the uniformity of the hot layer throughout a test, and the consistency of the temperature from test to test. The repeatability of each suppression method is also demonstrated by comparing results of compartment cooling achieved in repeat tests. Differences in average compartment temperature before and during suppression indicate that penciling tactics provide little cooling of the compartment. In narrow fog attacks, the hot layer is pushed toward the floor, resulting in increased temperatures in the lower layer, generally an undesired result. Wide angle fog methods may have greater impact on compartment temperature as compared to straight stream or narrow fog methods, however, they also result in large increases in temperature at the firefighter. Wide angle burst tactics less effectively cool the compartment gases than continuous methods, but also lead to less impact on the firefighter. Greater numbers of bursts increase cooling of the compartment, but at the expense of increased impact on the firefighter. Including impact on the firefighter, continuous straight stream methods, at a nozzle discharge pressure of 700 kPa and aimed to the top of the rear compartment wall, appear the best choice for initial attack on the fire developed in these experiments. Due to variability between real fire scenarios and experiments such as these, significantly more study of the various suppression tactics is required before the most effective methods of suppression can be determined for a given set of fire scenarios.