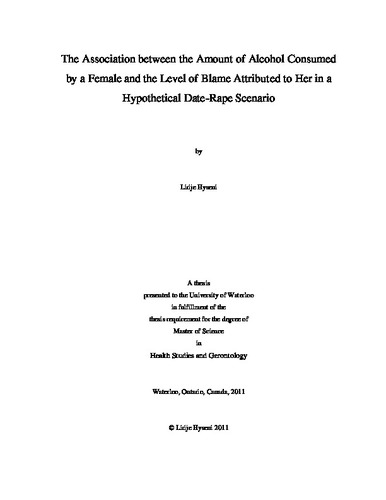 Background: Victims of sexual assault have been reported to blame themselves for the incident. They see themselves as having somehow contributed to the situation. Self-blame associated with a sexual assault is argued to be socially constructed, influenced by culture’s perception of sexual crimes. A specific behaviour that appears to contribute to victim’s self-blame is alcohol use during the sexual assault incident. Approximately half of sexual assaults are associated with alcohol consumption by one or both parties. Victims who consume alcohol during the incident are more likely to blame themselves for the event. Self-blame has been linked to a decreased likelihood of reporting a sexual assault to authorities, as victims predict that others will disapprove their behaviour and blame them for their victimization. Limited research has been conducted on attribution of blame to the female victims who have been under the influence of alcohol during the sexual assault incident. Objective: To examine the association between a female’s level of intoxication and the level of blame attributed to her, and how this is modified by initiation and severity of the event, in a hypothetical date-rape scenario. Methods: Secondary data analyses of 1004 quantitative telephone surveys completed in Sweden by randomly selected young adults aged 16-24. Date-rape vignettes were used and male’s and female’s levels of intoxication, severity of the outcome and the person initiating the sexual contact (perpetrator or victim) were manipulated. The depended variable was the amount of blame assigned to the female in the hypothetical date-rape scenario. The attribution of blame to the female was analysed using factorial ANOVA in SAS. Results: For female respondents, the level of blame attributed to the female in the hypothetical date-rape scenario depended on a three-way interaction between the inebriation level, initiation, and severity, controlling for female respondents’ living situation in the last 12 months, their frequency of drinking five or more drinks in the past 12 months, and their expectancy that ‘alcohol makes people more sexual’. For male respondents, however, the level of blame attributed only depended on the severity of the situation, controlling for male respondents’ mean number of standard drinks to feel the effects of alcohol and their attitude that ‘alcohol lessons control’. Conclusion: The inebriation level of the female in the date-rape scenario has been illustrated to impact the amount of blame attributed to her, by female respondents. This has implications for reporting rates of sexual crimes, and thus should be addressed by future policies and programs.

Lirije Hyseni (2011). The Association between the Amount of Alcohol Consumed by a Female and the Level of Blame Attributed to Her in a Hypothetical Date-Rape Scenario. UWSpace. http://hdl.handle.net/10012/6001