Multilingualism and the risk of Alzheimer disease and dementia 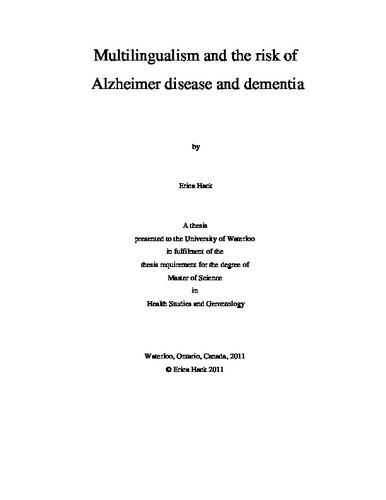 Background: Alzheimer disease (AD) is a progressive, late-life neurodegenerative disorder. Given the aging population, AD is a significant health concern. According to the Alzheimer Society of Canada (Smetanin et al., 2009), in 25 years 2.8% of the Canadian population will have AD or a related dementia. Presently, there is no cure for AD; therefore, efforts to either delay AD onset or prevent AD altogether are a primary focus. The ability to proficiently speak many languages has been associated with certain cognitive advantages. Based on these findings, multilinguals are hypothesized to be more resistant to cognitive decline than monolinguals. More research is warranted in order to further this theory and to contribute to strategies to prevent or delay AD. Objectives: The first study objective was to evaluate whether multilingualism was associated with the development of AD. The second study objective was to assess whether multilingualism was associated with later dementia onset. Methods: Analyses were based on data from the Nun Study, a longitudinal study of aging in 678 participants 75+ years living in the United States. In order to address the first study objective, the association between multilingualism and AD was assessed in 157 participants using logistic regression models adjusted for age, education, apolipoprotein E-E4 (ApoE-E4) status, immigrant status, and occupation. Additional subgroup analyses also included covariates associated with career length and linguistic ability (grammatical complexity and idea density). AD was diagnosed based on criteria for both clinical dementia and AD neuropathology. Dementia was diagnosed using the Diagnostic and Statistical Manual of Mental Disorders, 4th edition criterion (American Psychiatric Association, 1994) (based on the Consortium to Establish a Registry for Alzheimer’s Disease battery of tests (Morris, Heyman, Mohs, & Hughes, 1989) and performance on activities of daily living), while AD neuropathology was based on the National Institute on Aging and Reagan Institute criterion (The National Institute on Aging - Reagan Institute (NIA-RI) Working Group on Diagnostic Criteria for the Neuropathological Assessment of Alzheimer's Disease, 1997). In order to address the second study objective, dementia likelihood was assessed in 325 participants using discrete-time survival analyses adjusted for age, ApoE-E4 status, education, and linguistic ability. Results: When adjusted for age, education, ApoE-E4 status, occupation, and immigrant status, participants speaking two or more languages had similar AD risks compared to monolinguals (OR = 1.05; 95% CI = 0.45-2.50). However, when grammatical complexity was held constant across participants, speaking two or more languages was associated with a four-fold decrease in AD risk compared to speaking one language (OR = 0.25; 95% CI = 0.04-1.23), although this did not reach statistical significance. When the association between multilingualism and time of dementia onset was assessed, the dementia hazard function estimates for all participants were constant and persisted throughout the follow-up period of the study. When ApoE-E4 status and baseline age were held constant, participants speaking four or more languages were significantly less likely to develop dementia than monolingual participants (OR = 0.14; 95% CI = 0.01-0.66). An interaction between multilingualism and the other two covariates (ApoE-E4 status and baseline age) was observed: the oldest participants with an ApoE-E4 allele who spoke four or more languages had smaller dementia risks than younger participants without an ApoE-E4 allele who spoke one, two, or three languages. Participants speaking two or three languages were no less likely than monolinguals to develop dementia across the study duration. When idea density was held constant across participants, multilingualism was associated with a nonsignificant decreased risk of dementia for individuals speaking three (OR = 0.62; 95% CI = 0.16-2.41) or four or more languages (OR = 0.53; 95% CI = 0.06-4.91) while participants speaking two languages were no more at risk for dementia than monolinguals (OR = 1.08; 95% CI = 0.43-2.69). Discussion: Initially, multilingualism did not appear to confer protection against AD. After holding grammatical complexity constant across all participants, however, multilingualism was found to be associated with AD risk. Therefore, linguistic ability confounded the initial relationship measured by this study. When the association between multilingualism and time of dementia onset was evaluated, participants were no more likely to develop dementia in one time period than another, and monolingual participants were no more likely to develop dementia in earlier time periods than multilinguals. While a trend of decreasing dementia risk with ascending number of languages spoken was not observed, speaking four or more languages was consistently associated with decreased dementia risk compared to speaking one language. The presence of an ApoE-E4 allele and low linguistic ability had a strong and consistent significant association with increased AD and dementia risk. Therefore, the influence of these variables on the association of multilingualism with AD and dementia is worthy of further exploration. Overall, this study provided some support for a protective effect of multilingualism on AD and dementia. Some of the present investigation’s results differ, however, from those of previous studies. This is not surprising, considering the present study utilized different methodologies than other studies in this research area. For instance, our study employed a definition of multilingualism based on self-report data – participants were classified as multilingual based on the number of languages they reported proficiency with. Therefore, our definition of multilingualism was less strict than definitions used in previous studies. However, our study employed much stricter outcome criteria than those used in previous studies, as our study is the first in this area to confirm AD cases with AD neuropathology evaluations. Our study is also the first io utilize prospective data and to include participants who remained dementia-free in addition to participants developing AD and dementia. In addition, this is the only study in this research area to evaluate the relationship of multilingualism with AD and dementia in the context of important covariates such as ApoE-E4 status and linguistic ability. Therefore, while some of our results contrast with other findings in this area, this is understandable given our novel methodologies. A broad range of study methods must be used in the future if we are to generate the depth of evidence needed for a full understanding of the relationship of multilingualism with AD and dementia. A better understanding of this relationship may also provide insight into both cognitive and brain reserve mechanisms, which could help more individuals maintain cognitive function into late life.