The Impacts of Climate Investment Funds on Multilateral Adaptation Finance 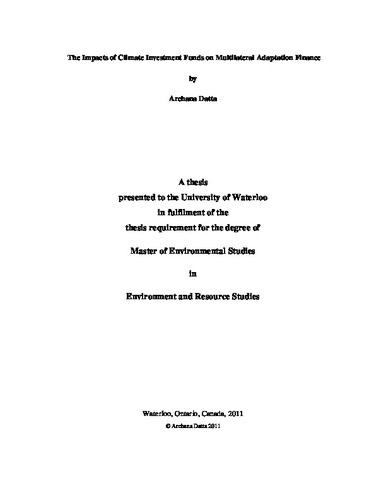 The UN Framework Convention on Climate Change (FCCC) is a global agreement between 194 countries to stabilize greenhouse gas concentration in the atmosphere to avoid dangerous anthropogenic interference with the climate system. Through this Convention, developed countries have also agreed to provide developing countries with funds to both reduce greenhouse gas emissions (mitigate) and build resilience to the current and anticipated changes in average climate conditions (adaptation). This thesis is centered on financing for adaptation to climate change. While there are several funds administered by a UNFCCC-appointed institute, the World Bank recently launched Climate Investment Funds as an interim mechanism (set to expire in 2012, when the existing UNFCCC financial architecture is to be revised) for providing, among other things, adaptation finance in selected developing countries. This thesis will explore the opportunities and challenges for adaptation financing under the Climate Investment Funds (CIF), as compared to the UNFCCC. Document analysis and two rounds of interviews were done to generate information to assess the ability of the CIF to respond to the needs of adaptation financing and to fetch the institutional and governance issues that arise from the involvement of a World Bank-administered fund, namely CIF, in the climate finance regime. It was concluded that while there are some achievements with the CIF exercise, there are also significant institutional, governance and funding challenges for the CIF.