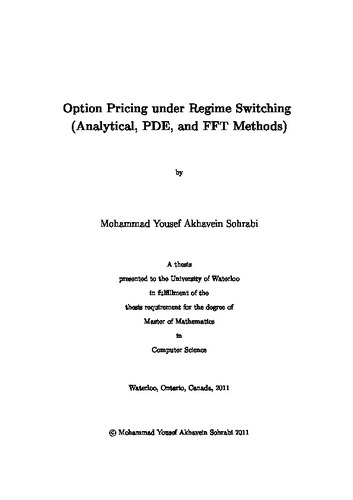 Although globally used in option pricing, the Black-Scholes model has not been able to reflect the evolution of stocks in the real world. A regime-switching model which allows jumps in the underlying asset prices and the parameters of the corresponding stochastic process is more accurate. We evaluate the analytical solution for pricing of European options under a two-state regime switching model. Both the convergence of the analytical solution and the feature of implied volatility are investigated through numerical examples. We develop a number of techniques for pricing American options by solving the system of partial differential equations in a general \mathcal{K}-state regime-switching model. The linear complementarity problem is replaced by either the penalty or the direct control formulations. With an implicit discretization, we compare a number of iterative procedures (full policy iteration, fixed point-policy iteration, and local American iteration) for the associated nonlinear algebraic equations. Specifically, a linear system appears in the full policy iteration which can be solved directly or iteratively. Numerical tests indicate that the fixed point-policy iteration and the full-policy iteration (using a simple iteration for the linear system), both coupled with a penalty formulation, results in an efficient method. In addition, using a direct solution method to solve the linear system appearing in the full policy iteration is usually computationally very expensive depending on the jump parameters. A Fourier transform is applied to the system of partial differential equations for pricing American options to obtain a linear system of ordinary differential equations that can be solved explicitly at each timestep. We develop the Fourier space timestepping algorithm which incorporates a timestepping scheme in the frequency domain, in which the frequency domain prices are obtained by applying the discrete Fourier transform to the spatial domain. Close to quadratic convergence in time and space is observed for all regimes when using a second order Crank-Nicolson scheme for approximation of the explicit solution of the ordinary differential equation.