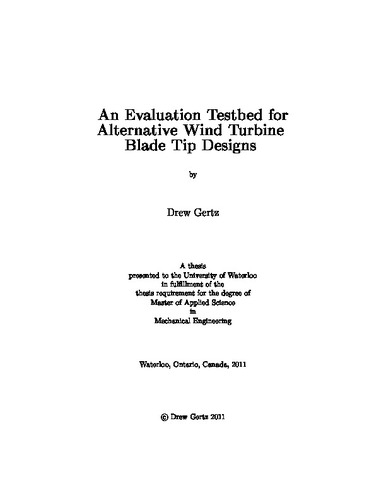 The majority of present-day horizontal axis wind turbine blade tips are simple designs based on historical trends. There is, however, some evidence that varying the design of the tip can result in significant changes in performance characteristics such as power output, noise, and structural loading. Very few studies have tested this idea on an actual rotating blade and there is much to be investigated. Thus, a project was devised to examine experimentally the effect of various tip designs on an operational rotating wind turbine rotor. A tapered, twisted blade 1.6 m in length was custom designed for use in the UW Wind Energy Research Facility using the blade element momentum (BEM) method. A coupling mechanism was designed such that the outer 10% of each blade could be exchanged to evaluate the effect of different tip designs. A set of three blades was fabricated out of fibre-reinforced plastic, while the tips were machined out of maple wood on a CNC milling machine. The blade was evaluated with a standard rectangular tip to establish baseline performance against which to compare the alternative tip configurations. The three-bladed rotor was tested at shaft speeds from 100 rpm to 240 rpm in wind speeds up to the facility maximum of 11.1 m/s. The rotor was found to have a maximum power coefficient of 0.42 at a tip speed ratio of 5.3 and a 1.45 kW rated power at a wind speed of 11 m/s. The performance was compared to predictions made using the BEM method with airfoil data generated using a modified Viterna method and the Aerodas method. While the Aerodas data was capable of predicting the power fairly accurately from 5 m/s to 10 m/s, the modified Viterna method predicted the entire curve much more accurately. Two winglet designs were also tested. The first (called Maniaci) was designed by David Maniaci of Pennsylvania State University and the other (called Gertz) was designed by the author. Both winglets were found to augment the power by roughly 5% at wind speeds between 6.5 m/s and 9.5 m/s, while performance was decreased above and below this speed range. It was calculated that the annual energy production could be increased using the Maniaci and Gertz winglets by 2.3% and 3%, respectively. Considering the preliminary nature of the study the results are encouraging and it is likely that more optimal winglet designs could be designed and evaluated using the same method. More generally, this study proved that the blades with interchangeable tips are capable of being used as an evaluation testbed for alternative wind turbine blade tip designs.