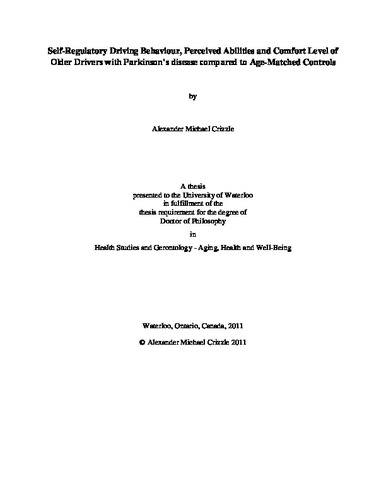 Introduction: Multiple studies have shown the symptoms of Parkinson's disease (PD) can impair driving performance. Studies have also found elevated crash rates in drivers with PD, however, none have controlled for exposure or amount of driving. Although a few studies have suggested that drivers with PD may self-regulate (e.g., by reducing exposure or avoiding challenging situations), findings were based on self-report data. Studies with healthy older drivers have shown that objective driving data is more accurate than self-estimates. Purposes: The primary objectives of this study were to examine whether drivers with PD restrict their driving (exposure and patterns) relative to an age-matched control group and explore possible reasons for such restrictions: trip purposes, perceptions of driving comfort and abilities, as well as depression, disease severity and symptoms associated with PD. Methods: A convenience sample of 27 drivers with PD (mean 71.6±6.6, range 57 to 82, 78% men) and 20 age-matched control drivers from the same region (70.6±7.9, range 57 to 84, 80% men) were assessed between October 2009 and August 2010. Driving data was collected for two weeks using two electronic devices (one with GPS) installed in each person‟s vehicle. Participants completed trip logs, questionnaires on background and usual driving habits, and measures of cognitive functioning, depression, quality of life, daytime sleepiness, driving comfort and abilities. Contrast sensitivity and brake response time were also assessed. Severity of PD was assessed using the Unified Parkinson‟s Disease Rating Scale (UPDRS) motor scores. An interview was conducted at the end of the second assessment to examine influence of the devices, driving problems and any departures from usual patterns over the monitoring period. Results: Of the 128 PD patients screened for possible study participation, 35% had already stopped driving. Former drivers were older, more likely to be women and had poorer UPDRS motor scores. Only 48% of those who were eligible for the study agreed to participate. Compared to controls, the PD group had significantly slower brake response times, higher depression and quality of life scores, less comfort driving at night and poorer perceptions of their driving abilities. The PD group also had significantly lower cognitive functioning scores than controls, and a significantly greater proportion (74% versus 45%) were classified as having mild cognitive impairment. Compared to vehicle recordings, both groups mis-estimated the amount they drove over two weeks (measurement error was 94 km for the PD group and 210 km for the controls). The PD group drove significantly less overall (days, trips, distance and duration), at night, on week-ends and in bad weather and for different purposes. Four of the PD drivers had minor accidents over the two weeks, while one lost his license. Conclusions: Self-estimates of exposure were inaccurate warranting the continued use of objective driving data. Overall, the findings suggest that drivers with PD appear to restrict their driving exposure and patterns relative to controls. The PD group were more likely to combine several activities into one trip, possibly due to fatigue. Moreover, they were more likely than controls to drive for medical appointments and less likely to drive for leisure activities and make out of town trips. The findings need to be replicated with larger samples and longer monitoring periods to examine changes in self-regulatory practices associated with disease progression and symptomatology. Other researchers are also likely to have similar difficulty in recruiting drivers with PD as this group may quit driving at an earlier age and those who are still driving are fearful of being reported to licensing authorities. Future studies also need to screen for cognitive impairment which often goes undetected, particularly in otherwise healthy drivers.