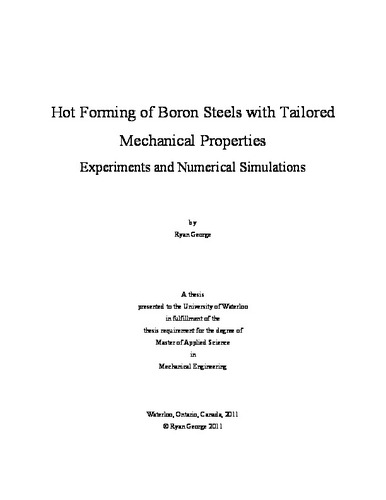 Hot forming of boron steels is becoming increasingly popular in the automotive industry due to the demands for weight reduction and increased safety requirements for new vehicles. Hot formed components offer a significant increase in strength over conventional cold-formed steels, which has allowed for reductions in material thickness (and thus weight) while maintaining the same strength. Hot formed components are typically used in structural applications to improve the integrity of the vehicle’s cabin in the event of a collision. It has been suggested, however, that the crash performance of certain hot formed parts may be increased by locally tailoring their mechanical properties to improve their energy absorption. The final microstructure of a hot formed part is driven by the rate at which it is cooled within the tooling during the forming and quenching process. By controlling the cooling rate of the part, it is possible to control the final microstructure, and thus the final mechanical properties. This thesis outlines the experimental and numerical studies that were performed for the hot forming of a lab-scale B-pillar. A hot forming die set was developed which has both heating and cooling capabilities to control the local cooling rate of the blank as it is formed and quenched. The first aspect of this research is to produce a hot formed part which is representative of an industrial component, and then to numerically model the process to predict the final mechanical properties. The second aspect is to produce a hot formed part with tailored mechanical properties, such that there are regions of the part with very high strength (very hard) and other regions with increased ductility (softer). By tailoring the microstructure to meet the performance requirement of a hot formed part, it may be possible to optimize its crash behavior and also reduce the overall weight. Cartridge heaters were installed into sections of the tooling allowing it to reach a maximum temperature of 400°C. Cooling channels are used in other sections to maintain it at approximately room temperature. Experiments were performed on 1.2 mm Usibor® 1500P steel at heated die temperatures ranging from 25°C to 400°C. In the fully cooled region, the Vickers hardness of the blank was measured to be 450 – 475 HV, on average. As the temperature of the heated region was increased, a significant softening trend was observed in the areas of the blank that were in contact with the heated tool. The greatest levels of softening occurred in the 400°C heated die trial. Hardness measurements as low as 234 HV were recorded, which represents a reduction in hardness of 49% compared to the fully cooled trials. Numerical models of the experiments were developed using LS-DYNA and use of its advanced hot forming material model which allows for microstructure and hardness prediction within the final part. The numerical models have shown promising results in terms of predicting the hardness trends as the temperature of the die increases. Thermal expansion of the tooling resulted in local changes in the geometry of the tooling which proved to be problematic during the forming and quenching stages of the process. The expansion caused unexpected changes in the part-die contact, and the resulting microstructures were altered. These thermal expansion issues were addressed in the current work by shimming the tooling; however, in future work the tooling should be designed to account for this expansion at the desired operating temperature.