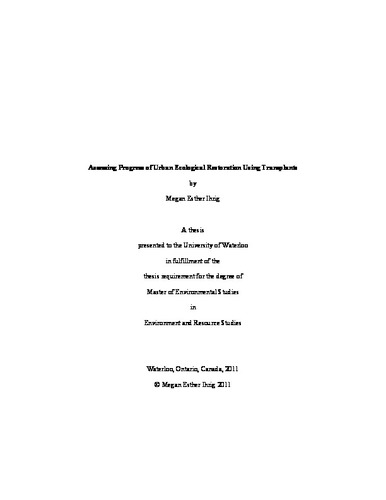 Forests are the dominant terrestrial ecosystem in Ontario and were once widespread throughout much of eastern North America; in southern Ontario, forest cover has declined from 90% to approximately 17% in the past 200 years. Conversion of the surrounding landscape to urban and agricultural land uses creates edge effects which increase the impact of forest cover loss and threaten ecological integrity. Other impacts on forest ecological integrity include incompatible human activities, a generally inhospitable landscape matrix, and microenvironment changes, including those from chemical pollution and heat island effects. Coupled with direct degradation from human activities like free-riding, the altered forest microenvironment can facilitate increased invasion by opportunistic and competitive plant species, e.g. Alliaria petiolata (Brassicaceae). This tends to be worse in urban areas because of greater visitation that creates soil compaction, trampling, and more vectors to introduce the seeds of invasive species. Active management is often necessary in areas which have been degraded. Ecological restoration represents an important active management tool for urban forest protected area managers. The ecological restoration of the forest understory in altered and threatened habitats represents an important aspect of forest restoration. For this study, I tested the effectiveness of an ecological restoration using a multi-species assemblage approach with three native understory species to restore the herbaceous layer in Natchez Hills, an Environmentally Sensitive Policy Area in Kitchener, Ontario. The ecological restoration site was degraded and this reduced native plant species in the forest understory. The species selected, Caulophyllum giganteum (Farwell) Loconte & W.H. Blackwell (Berberidaceae), Podophyllum peltatum Linnaeus (Berberidaceae) and Maianthemum racemosum subsp. racemosum (Linneaus) Link (Asparagaceae), are widespread throughout eastern North America, and were selected for use in this study because of their persistence and relative abundance in Natchez Hills ESPA. Adult transplants were planted into 2 metre by 2 metre quadrats in different densities and shoot populations were monitored for two field seasons to determine if density played a role in early ecological restoration success. The methodology I designed for the ecological restoration was as practical as possible, given the real world financial and logistical constraints faced by many urban forest managers. Statistical analysis using repeated measures multivariate analysis of variance showed aerial shoot density did not have a significant effect on early restoration success rates (p > 0.05). However, there was a significant increase in restored species. Caulophyllum giganteum and Podophyllum peltatum shoot populations increased by over 97% at the ecological restoration site one year after transplanting. Maianthemum racemosum subsp. racemosum shoot populations increased by 51% at the site. For comparison, another study in the same forest reported early ecological restoration rates of 92% to 100% for herbaceous understory species, including C. giganteum and P. peltatum. Other North American studies using transplanted perennial herbaceous material reported average survival rates of 16.6% two years after planting (varying from 1.25% to 51.4% using eight herbaceous species in the Boston area), to 91% one year after restoration (varying from 42.1% to 100% using 19 herbaceous species of the deciduous forest in the Midwest). In instances where protected areas are degraded, active management and ecological restoration are often necessary tools. This ecological restoration demonstrated that the native herbaceous species used in this study are suitable for use in early ecological restorations in maple beech upland forests in the City of Kitchener. Using a practical and cost-effective methodology this ecological restoration experiment showed that it is possible to implement urban restoration of the forest understory in degraded areas, and to achieve success in early ecological restoration using native herbaceous forest understory species.