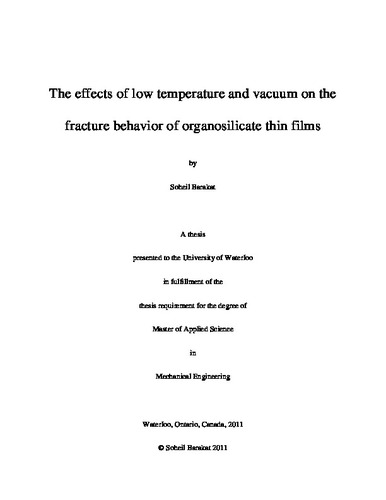 A novel load-displacement sensing instrument has been designed and fabricated to characterize the fracture properties of brittle thin films at low temperature (-30 °C) and pressure (1.6e-4 Pa). In this study, the instrument was used to investigate the effects of harsh environments on the fracture energies of organosilicate glass (OSG) and silicon carbonitride (SiCN) thin films under four-point bend loading. Experiment results showed that the energy release rates of film stacks are the highest when the environment contains a very low water molecule concentration. This condition can be achieved by purging the testing chamber with pure nitrogen or reducing the chamber pressure to less than 1 Pa. In contrast, cracks propagated readily along OSG/SiCN interfaces when experiments were performed submerged in de-ionized (DI) water. The effect of low temperature (-30 °C) on thin film fracture was also studied and the results demonstrated that there is no observed degradation of the OSG fracture properties. X-ray photoelectron spectroscopy (XPS) was used to identify the chemical composition of the fracture surfaces. Furthermore, a finite element model was used to investigate the effects on the stress intensity factors at the crack tip of a four-point bend sample when a compliant epoxy layer is present in the film stack.

Soheil Barakat (2011). The effects of low temperature and vacuum on the fracture behavior of organosilicate thin films. UWSpace. http://hdl.handle.net/10012/5919