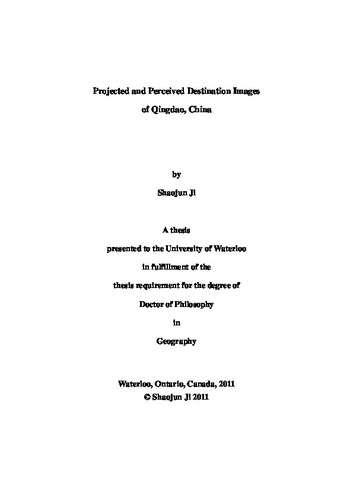 The images of tourist destinations significantly influence travel choices. Accordingly, destination marketers make great efforts to inform their potential consumers about their destinations using deliberately designed projected images. This research focuses on a Chinese tourism destination, Qingdao, exploring the relationships between the images projected by Qingdao government agencies and those perceived by current visitors and by residents. It also examines the factors that influence the image formation of visitors and residents. Three sources of information are used in this research: promotional materials issued by the Qingdao municipal government and the Qingdao Tourism Administration, key informant interview transcripts and a questionnaires survey. The promotional materials were collected from the aforementioned agencies in May 2009. Key informant interviews were conducted in April and May 2009. Self-administered surveys of 578 visitors and 337 residents of Qingdao were administered throughout May and June 2009. The image construct was conceptualized as having three dimensions: cognitive, affective and overall images. The cognitive image attributes included seafood, scenery, beaches, local people, green space, special events, ethnic attractions, weather, squares, architecture, relaxing atmosphere, resorts, hygiene and cleanliness, cultural attractions, golf course, highway system, accommodation, public transport, shopping, fashion shows, value for money, transportation cost, nightlife, football games, airline schedules, and traffic congestion. The affective image attributes included arousing-sleepy, exciting-gloomy, pleasant-unpleasant, and relaxing-distressful. Qualitative evaluation suggested greater congruence between the images projected by Qingdao government agencies and those perceived by visitors than quantitative correlation analysis. The projected images of Qingdao and images perceived by visitors were consistent in their emphases on certain image themes. However, the correlations between these two types of images suggested that the extent to which these image themes were emphasized differed. Similar results were found in the comparison between the images projected by Qingdao and those perceived by residents. Furthermore, most visitors and residents held positive images of Qingdao. Both similarities and differences were discovered in the cognitive, affective and overall images perceived by visitors and residents. Residents were generally more positive than visitors in their cognitive and affective images. It was found that sex, education, place of residence, and previous travel experience only significantly affected visitors’ images of one or two attributes, while age, occupation, primary motivation, most important information source used and number of sources used significantly influenced visitors’ images of between 5 and 8 attributes. Additionally, place attachment and importance of the 2008 Olympic Games were significantly positively correlated with most of the image attributes examined in this study, while importance of German Heritage and Qingdao International Beer Festival were significantly positively correlated with fewer attributes (8 and 6 attributes, respectively). With regard to the factors influencing resident images, it was discovered that sex, education, age, occupation, length of residence, most important source used and number of sources used significantly affected residents’ images to different degrees, ranging from 7 to 18 attributes. Furthermore, place attachment and the importance of German heritage, the 2008 Olympic Games and Qingdao International Beer Festival were significantly positively correlated with the majority of the image attributes examined in this research. This study is one of very few that compares projected and perceived images although methodological challenges for undertaking such research remain. It is also innovative in that it encompasses both tourists’ and residents’ images. Very few such studies have been undertaken in China which has a massive domestic tourism industry and is a major player in international tourism.