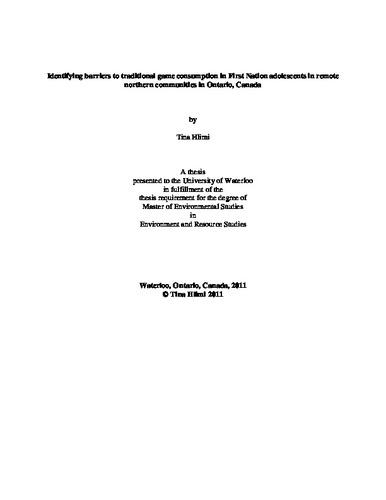 Objectives: To investigate factors influencing consumption of traditional foods (e.g., wild game, fish) and concerns about environmental contaminants among schoolchildren of the Mushkegowuk Territory First Nations (Moose Factory, Fort Albany, Kashechewan, Attawapiskat, and Peawanuck). Study Design: Cross-sectional data collection from a Web-based Eating Behaviour Questionnaire (WEB-Q). Methods: Schoolchildren in grades 6-12 (n = 262) responded to four of the WEB-Q questions: (1) Do you eat game? (2) How often do you eat game? (3) How concerned are you about the environmental contaminants in the wild game and fish that you eat? (4) I would eat more game if...[ six response options]. Data were collected from 2004-2009. Hierarchical log-linear modelling (LLM) was used for analyses of multi-way frequency data. Results: Of the school children answering the specific questions: 174 consumed game; 95 reported concerns about contaminants in game; and 84 would increase their game consumption if it were more available in their homes. LLM revealed significant differences between communities; schoolchildren in Moose Factory consumed game “rarely or never” at greater than expected frequency, and fewer than expected consumed game “at least once a day.” Schoolchildren in Kashechewan had greater frequency of daily game consumption and few were concerned about contaminants in game. Using LLM, we found that sex was an insignificant variable and did not affect game consumption frequency or environmental contaminant concern. Conclusion: The decreasing importance of the traditional diet was most evident in Moose Factory, possibly due to its more southerly location relative to the other First Nations examined.