The Ecological Economics of Resilience: Designing a Safe-Fail Civilization 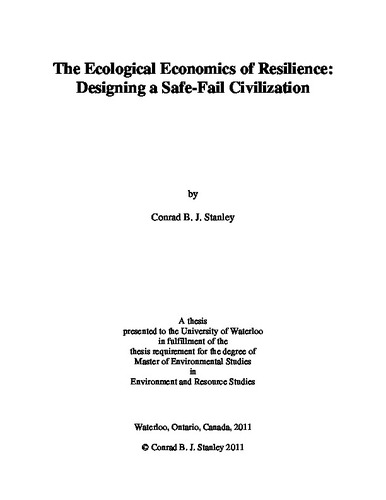 There is mounting evidence that sustainable scale thresholds are now being exceeded worldwide and environmental resource shocks (e.g. climate change, water and oil shortages) may be inevitable in some regions of the world in the near future. These could result in severe economic breakdowns, welfare loss, and in the worst-case, the collapse of modern civilization. Therefore, a pre-eminent challenge of our times is to determine how to design a resilient (safe-fail) economy – one that can endure, adapt to and successfully recover from breakdowns when they occur. Surprisingly, while ecological economic theory relies heavily on natural science concepts such as thermodynamics, insufficient attention has been paid to the important ecological concept of resilience, particularly as it applies to economic design. The three major policy goals of current ecological economic theory (sustainable scale, just distribution and efficient allocation) focus instead on preventing environmental resource shocks and breakdowns, but given their unpredictability prevention may not always be possible. How resilience can inform the blossoming field of ecological economics is thus explored in this theoretical, transdisciplinary paper. Drawing on literature as diverse as archaeology and disaster planning, it develops six key principles of economic resilience and applies them to analyze the resilience of key societal systems including our money, electricity, water, transportation, information/communication and emergency response systems. Overall, economic resilience appears to be a unique concern that is not readily subsumed under any of the three existing ecological economic policy pillars. In fact, efforts to build in resilience have the potential to both complement and at times contradict the other three goals, especially efficiency. The need to further study these possible tradeoffs provides strong justification for adding a fourth distinct policy pillar, namely “Resilient Design”, to core ecological economic theory. Indeed, ecological economist’s longstanding criticism of economic growth meshes readily with the Resilience Alliance’s own figure-8 adaptive cycle theory critiquing the resilience costs of growth, providing significant opportunities for the future collaboration of these two fields in broadening global system theory.