Fostering Adaptive Capacity and Resilience to Environmental Change in Sub-Arctic First Nations: The Use of Collaborative Geomatics, an Interactive, Web-based Informatics Tool 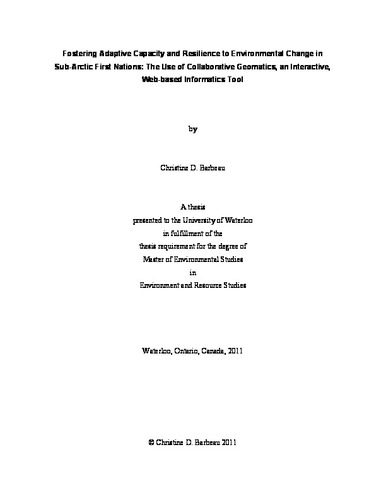 The Western James Bay region of northern Ontario (the Mushkegowuk Territory) is home to some of Canada’s largest wetlands and most pristine ecosystems. This region is also home to approximately 10,000 Omushekgo Cree who inhabit four First Nation communities. Environmental change due to climate change and major resource development are a reality to the people of this sub-arctic region. Furthermore, it is predicted that climate change will have amplified impacts in northern climates. Climate change has and will continue to have impacts on the distribution of species in arctic and sub-arctic ecosystems. To date, it is not clear to what extent these distributional changes in species due to climate change will have on First Nations’ place-based relationship with the land and what measures the Cree will take to adapt to these changes. The University of Waterloo’s Computer Systems Group has developed an approach and toolkit for the development of web-based, spatial data and information management systems referred to as collaborative geomatics. This system allows for place-based information, environmental and traditional environmental knowledge (TEK) storage and sharing between First Nation communities. And allows for the development of adaptive strategies and plans for future land use activities in the face of further resource development. This collaborative geomatic system has been designed with First Nation input and has been demonstrated to Chiefs and Councils of the Mushkegowuk Territory. Collaborative geomatics is an interactive, web-based, informatics tool that has been designed to store data, in a secure and culturally-appropriate framework on high-resolution satellite imagery. High-resolution imagery will become the backdrop to placed-based and TEK data. Community members will have the ability to input locations (e.g., significant sites, such as, seasonal camps and hunting locations) on the map in addition to uploading tabular and media data. This allows for the generation of dynamic and robust spatially-relevant information and knowledge-base. Beginning in August of 2009, formal and informal meetings were held with personnel from the Lands and Resources unit of Mushkegowuk Council, First Nations Chiefs and Councils (the elected local government), and other community members of MooseCree First Nation, Fort Albany First Nation, Kashechewan First Nation, Attawapiskat First Nation, and Weenusk First Nation to gather their assessment (i.e., viability) of the Mushkegowuk collaborative geomatics tool. Together with this formative assessment process, 16 semi-directive interviews (from October 2010 to February 2011) were conducted with community members of Fort Albany First Nations. Interview participants were purposively sampled and included: Chief & Council members, First Nation office personnel, education personnel, health services personnel, elders (≥60 years of age), and young adults. Each interview was audio recorded and transcribed verbatim. Following an adapted grounded theory methodological approach, the transcripts of each interview were coded and categorized according to themes. Throughout the assessment process, the research team received constructive feedback on the system. Each participant noted the utility of the tool to be used in the education of younger generations. Furthermore, participants felt that they would be able to use the tool to store TEK and help monitor environmental change. The greatest strength of the system was seen to be the visualization of information in numerous media forms (pictures and videos), while the greatest perceived weakness of the system was the security of the information. However, once user accessibility (usernames and passwords) was explained the concern over security of information was greatly reduced. This collaborative geomatic system has the potential to enhance the Mushkegowuk First Nations’ adaptive capacity to address environmental change by allowing them to make informed decisions, utilizing the knowledge stored in the collaborative geomatics tool.