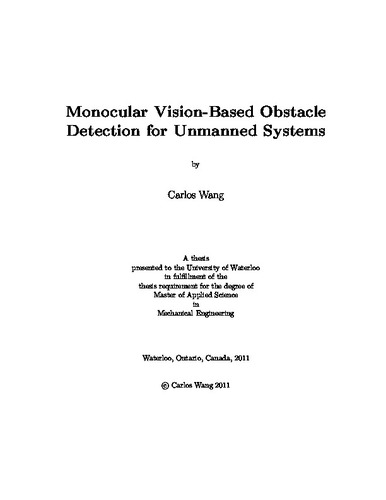 Many potential indoor applications exist for autonomous vehicles, such as automated surveillance, inspection, and document delivery. A key requirement for autonomous operation is for the vehicles to be able to detect and map obstacles in order to avoid collisions. This work develops a comprehensive 3D scene reconstruction algorithm based on known vehicle motion and vision data that is specifically tailored to the indoor environment. Visible light cameras are one of the many sensors available for capturing information from the environment, and their key advantages over other sensors are that they are light weight, power efficient, cost effective, and provide abundant information about the scene. The emphasis on 3D indoor mapping enables the assumption that a large majority of the area to be mapped is comprised of planar surfaces such as floors, walls and ceilings, which can be exploited to simplify the complex task of dense reconstruction of the environment from monocular vision data. In this thesis, the Planar Surface Reconstruction (PSR) algorithm is presented. It extracts surface information from images and combines it with 3D point estimates in order to generate a reliable and complete environment map. It was designed to be used for single cameras with the primary assumptions that the objects in the environment are flat, static and chromatically unique. The algorithm finds and tracks Scale Invariant Feature Transform (SIFT) features from a sequence of images to calculate 3D point estimates. The individual surface information is extracted using a combination of the Kuwahara filter and mean shift segmentation, which is then coupled with the 3D point estimates to fit these surfaces in the environment map. The resultant map consists of both surfaces and points that are assumed to represent obstacles in the scene. A ground vehicle platform was developed for the real-time implementation of the algorithm and experiments were done to assess the PSR algorithm. Both clean and cluttered scenarios were used to evaluate the quality of the surfaces generated from the algorithm. The clean scenario satisfies the primary assumptions underlying the PSR algorithm, and as a result produced accurate surface details of the scene, while the cluttered scenario generated lower quality, but still promising, results. The significance behind these findings is that it is shown that incorporating object surface recognition into dense 3D reconstruction can significantly improve the overall quality of the environment map.