The Application of MEMS Microphone Arrays to Aeroacoustic Measurements 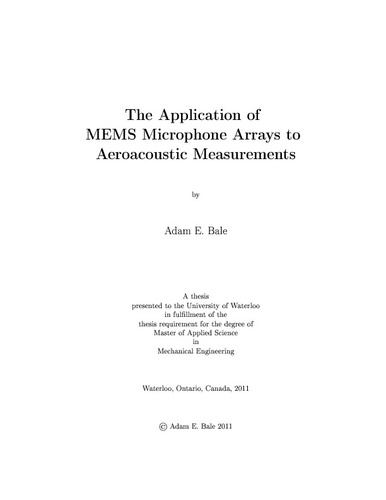 Aeroacoustic emissions were identified as a primary concern in the public acceptance of wind turbines. A review of literature involving sound localization was undertaken and led to the design of two microphone arrays to identify acoustic sources. A small-scale array composed of 27 sensors was produced with the intention of improving the quality of sound measurements over those made by a single microphone in a small, closed-loop wind tunnel. A large-scale array containing 30 microphones was also implemented to allow for measurements of aeroacoustic emissions from airfoils and rotating wind turbines. To minimize cost and pursue alternative sensor technologies, microelectromechanical microphones were selected for the array sensors and assembled into the arrays on printed circuit boards. Characterization of the microphones was completed using a combination of calibration techniques, primarily in a plane wave tube. Array response to known sources was quantified by analyzing source maps with respect to source location accuracy, beamwidth, and root mean square error. Multiple sources and rotating sources were tested to assess array performance. Following validation with known sources, wind tunnel testing of a 600 watt wind turbine was performed at freestream speeds of 2.5 m/s, 3.5 m/s, 4.5 m/s, and to 5.5 m/s. Significant aeroacoustic emissions were noted from the turbine in the 4.5 m/s and 5.5 m/s cases, with an increase of up to 12 dB over background levels. Source maps from the 5.5 m/s tests revealed that the primary location of aeroacoustic emissions was near the outer radii of the rotor, but not at the tip, and generally moved radially outward with increasing frequency. The azimuthal location of the greatest sound pressure levels was typically found to be between 120º and 130º measured counterclockwise from the upward vertical, coinciding with the predicted location of greatest emissions provided by an analytical model based on dipole directivity and convective amplification. Analysis of the acoustic spectra, turbine operating characteristics, and previous literature suggested that the sound emissions emanated from the trailing edge of the blades.