Interaction and linkage in the Canadian tobacco control community: Implications for the research process 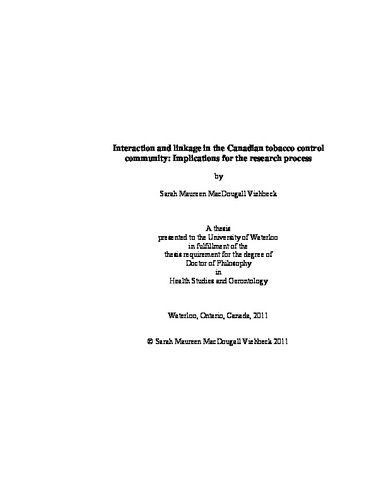 Study Purpose: This research aimed to: (1) understand interactions between researchers and policy-makers in the Canadian tobacco control research community and, (2) explore the relationship between interaction and alignment of research and policy within tobacco control. Methods/Analyses: Semi-structured, in-depth interviews were conducted by phone or in-person with a purposeful sample of Canadian policy-makers at the provincial and federal-levels (n=10) and tobacco control researchers (n=8). A grounded theory methodology was used to guide interview conduct and analyses. Sampling of policy-makers was based on leadership roles for tobacco control in their respective jurisdictions and nominations. Sampling for researchers was based on nominations. Interviews were audio-recorded with permission and transcribed. Transcripts were shared with participants for verification. Results: The tobacco control context in Canada represents a mature field with a historically active policy agenda and an increasingly well-established research community. Through the analysis, nine data-driven categories emerged related to interactions between researchers and research users. The data were further examined to understand possible relationships between interaction and alignment. The nine major categories related to: (1) “two communities”, including the nature of policy and the differential timeframes of research and policy; (2) structures to support interaction, including within or cross-provincial and/or national facilitative mechanisms for interaction between researchers and research users to occur; (3) relationship building between researchers and research users, including the deliberate nature of building and reinforcing relationships over time; (4) interaction in the research process by research users; (5) interaction in the policy process by researchers; (6) independence and credibility of researchers; (7) incentives and barriers to interactions; (8) relevance and timeliness of evidence relative to decision-making needs, and; (9) alignment, including the extent to which research and policy share priorities and objectives. Significance: Results provide insight into the researcher and research user relationships in the Canadian tobacco control community. This study extends existing conceptual work in the area of knowledge exchange particularly from a public health perspective and has implications for other aspects of chronic disease prevention.