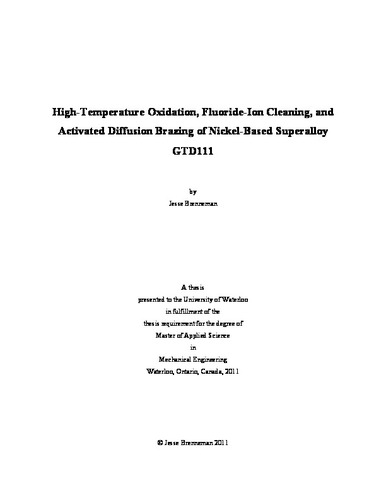 The need for industrial gas turbines to operate at higher temperatures and/or speeds has resulted in the continual modification of nickel-based superalloys to provide better high-temperature strength and corrosion resistance for components such as hot-section turbine blades. Thermal-Mechanical Fatigue (TMF) cracking, accelerated by the oxidation that forms as a result of the exposure of bare metal during the crack-opening stages, is one of the most common forms of damage experienced by service-run turbine blades. Due to the high costs associated with manufacturing nickel-based superalloy components, damaged turbine blades must be repaired to restore their original mechanical properties. One such method, Activated Diffusion Brazing (ADB), is under development for this purpose, and involves melting a two-part powder mixture into a damaged region. However, the tenacious oxides formed on nickel-based superalloy components provide an obstacle for the repair process, and must be removed. Fluoride-Ion Cleaning (FIC) uses flowing hydrogen and HF gas to remove tenacious oxide scales through a set of chemical reactions, leaving cleaned components free of oxide compounds and depleted of the strong oxide-formers of Al and Ti. GTD111 is a nickel-based superalloy containing the strong oxidizing elements of Al, Ti, and Cr, and is similar in composition to other nickel-based superalloys such as DD8 and Rene95. Literature concerning the oxidation, cleaning, and brazing of this particular alloy is limited, and as such this thesis serves as a comprehensive overview of the chemical effects of each above process on GTD111. The objectives of this project are to determine, through SEM-EDX and element mapping analysis, the oxidation behavior of nickel-based superalloy GTD111, the effects of oxidation and FIC on the chemistry near the surface of this particular alloy, and the effects of mixing ratio and paste viscosity on the quality of repairs made by ADB. Notches of 8 mm depth and 0.25 mm width were made in coupons of GTD111 via wire-EDM and samples were oxidized between 1 and 452 hours at 900°C. Samples oxidized between 96 and 452 hours were sectioned in half and one half of each sample was cleaned via the standard FIC process at Ti-Coating Inc. Notches of 8 mm depth and 1 mm width, also made via wire-EDM, were repaired by the ADB process with a bonding temperature of 1220°C and a holding time of 65 minutes. Time-dependent multi-layer oxide growth was observed on all samples, consisting of an innermost discontinuous aluminum oxide region, followed by a thin continuous band of Ni-W-Ta oxide and a thicker, very dense chromium oxide layer. Some oxidation times exhibited the presence of weak, inconsistent oxide regions rich in Ni and/or Ti. Since the GTD111 alloy does not contain sufficient amount of Al to form a continuous layer – as 5-7% Al is required – oxidation resistance was provided mainly by the formation of the dense chromium oxide layer. A region heavily depleted of Al and Ti and therefore the strengthening gamma prime phase was observed below and surrounding the Al-rich oxide regions. Chemical analysis of cleaned samples showed that the standard FIC process at Ti-Coating Inc. was able to remove all oxide compounds formed during oxidation at 900°C, and that the prior oxidation time had no effect on the chemistry within the surface of the cleaned samples; however, the depths of elemental and gamma prime phase depletion were affected. The elemental depletions of Al and Ti have been observed in past studies, but depletions of Ni and concentrations of Cr near the surfaces of cleaned components have not been previously observed. Preliminary brazing trials made with varying paste viscosities demonstrated the importance of paste pre-placement and maintaining the molten filler metal within the notch, as better pre-placement resulted in higher densities in the braze-repaired region of the brazing trial samples. Although porosity was observed on all samples, the paste pre-placement was found to be more important in reducing porosity than the mixing ratio and paste viscosity, although using an appropriate paste viscosity allowed for better pre-placement.