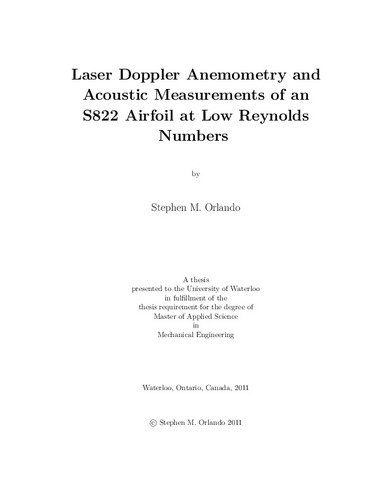 Experimental aeroacoustic research was conducted on a wind turbine specific airfoil at low Reynolds numbers. The goal of this thesis was to study trailing edge noise generation from the airfoil and investigate correlations between the noise and the flow field. Before experiments were performed the current wind tunnel had to be modified in order to make it more suitable for aeroacoustic tests. Sound absorbing foam was added to the inside of the tunnel to lower the background noise levels and turbulence reduction screens were added which lowered the turbulence. An S822 airfoil was chosen because it is designed for low Reynolds flows attainable in the wind tunnel which are on the order of 104. Smoke wire flow visualization was used to gain insight into the airfoil wake development and oil film flow visualization was used to qualitatively assess the boundary layer development. Laser Doppler anemometry (LDA) was used to measure two components of velocity at high data rates in the airfoil wake. Wake profiles were measured in addition to single point measurements to determine the velocity spectrum. A microphone was mounted inside the test section in order to measure the trailing edge noise. Initial plans included measuring the trailing edge noise with a microphone array capable of quantifying and locating noise sources. Although an array was built and beamforming code was written it was only used in preliminary monopole source tests. Oil film results showed the behaviour of the boundary layer to be consistent with previous low Reynolds number experiments. LDA results revealed sharp peaks in the velocity spectra at 1100 Hz from U0 = 15–24 m/s, and 3100 and 3800 Hz, from U0 = 25–35 m/s, which were inconsistent with vortex shedding results of previous researchers. Also present were a series of broad peaks in the spectra that increase from 1200–1700 Hz in the U0 = 25–35 m/s range. The shedding frequency from the smoke wire flow visualization was calculated to be 1250 Hz at U0 = 26 m/s. These sharp peaks were also present in the acoustic spectrum. It was reasoned that these peaks are due to wind tunnel resonance which is a common occurrence in hard wall wind tunnels. In particular the tone at 1100 Hz is due to a standing wave with a wavelength equal to half the tunnel width. The shedding frequency from the smoke wire flow visualization was calculated to be 1100 Hz at U0 = 20 m/s. These tones exhibited a “ladder-like” relationship with freestream velocity, another aspect indicative of wind tunnel resonance. It was reasoned that the wind tunnel resonance was forcing the shedding frequency of the airfoil in the U0 = 15–24 m/s range, and in the U0 = 25–35 m/s range, the shedding frequency corresponded to the broad peaks in the LDA spectra.