On the Deformation Mechanics of Hyperelastic Porous Materials 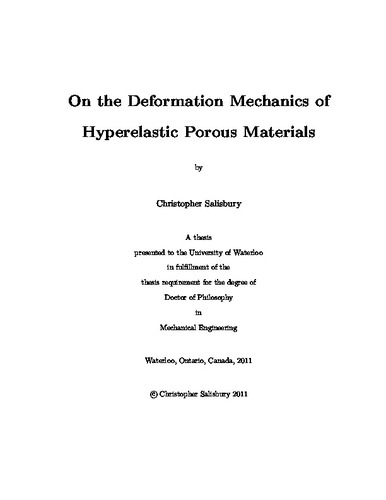 The understanding of the deformation mechanics within porous structures is an important field of study as these materials exist in nature as well as can be manufactured industrially influencing our lives daily. The motivation of the research contained within this manuscript was inspired by the desire to understand the mechanics of an elastomeric closed–cell porous material. This type of porous material is often used in load–bearing applications such as sport helmet liners and packing material which can be subjected to large deformations at high rates. Additionally, short term transient effects were explored. In order to investigate the deformation mechanics of a closed cell elastomeric foam, a polychloroprene (neoprene) material was chosen as it was available in both rubber form and a foam with relatively consistent cell size. Compression tests were conducted on the polychloroprene rubber at strain rates ranging from 0.001/s to 2700/s which identified that it had a hyper–viscoelastic behaviour with a significant strain rate dependence. A newly developed constitutive model was created to capture the response of the polychloroprene rubber. A coupled finite element model of the polychloroprene foam was created and compared to experimental tests for validation. The model slightly over predicted the stress level response of the experimental tests. The model was used to identify momentum dissipation mechanisms that contributed to the low wave speed measurement of approximately 70 m/s determined from the model. The investigation of wave transit times through use of the model was key to interpreting experimental data. Of the morphological factors investigated, it was determined that wall thickness had the most significant impact on the stress response of the foam. The pore–scale model was useful for visualizing wavepropagation effects and deformation mechanics which was not feasible experimentally.