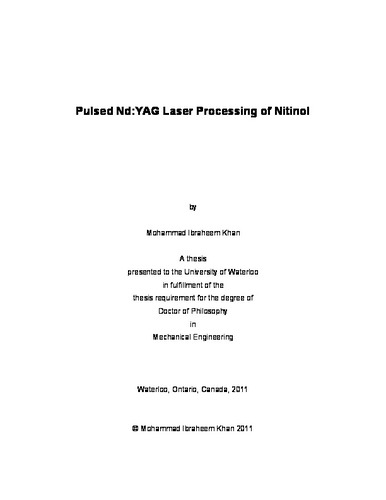 The excellent pseudoelasticity, shape memory and biocompatibility of Nitinol have made it a leading candidate for applications in various fields, including aerospace, micro-electronics and medical devices. Challenges associated with laser processing need to be resolved before its full potential in practical applications can be realized. The current thesis details the effects of pulsed Nd:YAG laser processing on Ni-rich (Ni-49.2. at.% Ti) Nitinol. First, the mechanical, pseudoelastic and cyclic loading properties for varying process parameters have been compared to those of the base metal. Process parameters were shown to greatly influence the mechanical performance. This was due to local yielding occurring within the processed material during tensile straining. In addition, laser processed samples showed higher permanent residual strain and exhibited a slightly higher efficiency for energy storage during the initial 5 cycles compared to base material. Fracture surfaces of base material revealed ductile dimpled surfaces while welded specimens exhibited both brittle (low peak power) and ductile (high peak power) failure modes. DSC analyses conducted on the processed metal revealed additional high temperature transformation peaks. These peaks were attributed to the local phase conversion induced by laser processing. Further corroboration was made with room temperature XRD analysis, showing only austenite in the base metal and added martensite peaks in the melted metal. Temperature controlled TEM observations confirmed high temperature transformation peaks to be associated with processed metal. Furthermore, TEM analysis aided in identifying the submicron second phase particles observed in fracture surfaces as Ti2Ni. Finally, local phase conversion was correlated to change in local chemical composition. Preferential vaporization of nickel was determined to cause the change in Ni/Ti ratio. This in turn explained the altered mechanical performance and presence of the Ti-rich intermetallic (Ti2Ni). Consequently, a novel method using a high power density energy source to alter transformation temperature of shape memory alloys (SMA’s) was developed. Results were used to successfully demonstrate a novel technology that can embed additional memories in Nitinol and other SMA’s. Possessing the ability to control local transformation temperatures and as a result the shape memory effect of SMA’s promises to enhance their functionality while enabling new applications to be realized.