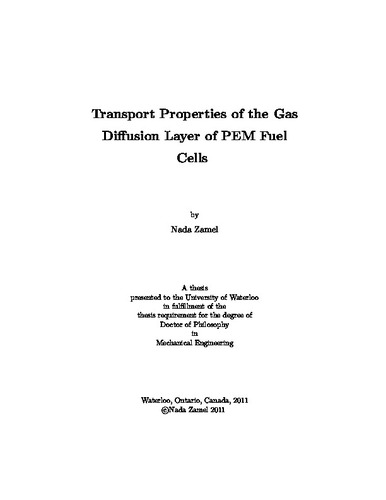 Non-woven carbon paper is a porous material composed of carbon composite and is the preferred material for use as the gas diffusion layer (GDL) of polymer electrolyte membrane (PEM) fuel cells. This material is both chemically and mechanically stable and provides a free path for diffusion of reactants and removal of products and is electrically conductive for transport of electrons. The transport of species in the GDL has a direct effect on the overall reaction rate in the catalyst layer. Numerical simulation of these transport phenomena is dependent on the transport properties associated with each phenomenon. Most of the available correlations in literature for these properties have been formulated for spherical shell porous media, sand and rock, which are not representative of the structure of the GDL. Hence, the objective of this research work is to investigate the transport properties (diffusion coefficient, thermal conductivity, electrical conductivity, intrinsic and relative permeability and the capillary pressure) of the GDL using experimental and numerical techniques. In this thesis, a three-dimensional reconstruction of the complex, anisotropic structure of the GDL based on stochastic models is used to estimate its transport properties. To establish the validity of the numerical results, an extensive comparison is carried out against published and measured experimental data. It was found that the existing theoretical models result in inaccurate estimation of the transport properties, especially in neglecting the anisotropic nature of the layer. Due to the structure of the carbon paper GDL, it was found that the value of the transport properties in the in-plane direction are much higher than that in the through-plane direction. In the in-plane direction, the fibers are aligned in a more structured manner; hence, the resistance to mass transport is reduced. Based on the numerical results presented in this thesis, correlations of the transport properties are developed. Further, the structure of the carbon paper GDL is investigated using the method of standard porosimetry. The addition of Teflon was found have little effect on the overall pore volume at a pore radius of less than 3 micro meters. A transition region where the pore volume increased with the increase in pore radius was found to occur for a pore radius in the range 3<5.5 micro meters regardless of the PTFE content. Finally, the reduction of the overall pore volume was found to be proportional to the PTFE content. The diffusion coefficient is also measured in this thesis using a Loschmidt cell. The effect of temperature and PTFE loading on the overall diffusibility is examined. It was found that the temperature does not have an effect on the overall diffusibility of the GDL. This implies that the structure of the GDL is the main contributor to the resistance to gas diffusion in the GDL. A comparison between the measured diffusibility and that predicted by the existing available models in literature indicate that these models overpredict the diffusion coefficient of the GDL significantly. Finally, both the in-plane and through-plane thermal conductivity were measured using the method of monotonous heating. This method is a quasi-steady method; hence, it allows the measurement to be carried out for a wide range of temperatures. With this method, the phase transformation due to the presence of PTFE in the samples was investigated. Further, it was found that the through-plane thermal conductivity is much lower than its in-plane counterpart and has a different dependency on the temperature. Detailed investigation of the dependency of the thermal conductivity on the temperature suggests that the thermal expansion in the through-plane direction is positive while it is negative in the in-plane direction. This is an important finding in that it assists in further understanding of the structure of the carbon paper GDL. Finally, the thermal resistance in the through-plane direction due to fiber stacking was investigated and was shown to be dependent on both the temperature and compression pressure.