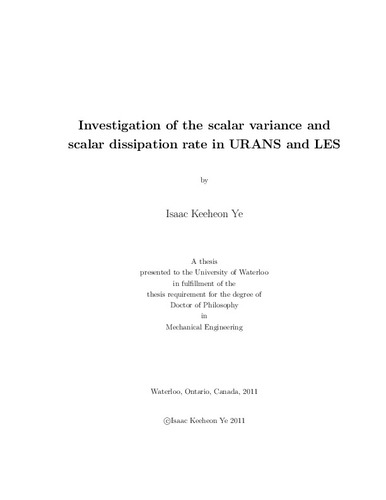 Large-eddy simulation (LES) and unsteady Reynolds-averaged Navier-Stokes (URANS) calculations have been performed to investigate the effects of different mathematical models for scalar variance and its dissipation rate as applied to both a non-reacting bluff-body turbulent flow and an extension to a reacting case. In the conserved scalar formalism, the mean value of a thermo-chemical variable is obtained through the PDF-weighted integration of the local description over the conserved scalar, the mixture fraction. The scalar variance, one of the key parameters for the determination of a presumed β-function PDF, is obtained by solving its own transport equation with the unclosed scalar dissipation rate modelled using either an algebraic expression or a transport equation. The proposed approach is first applied to URANS and then extended to LES. Velocity, length and time scales associated with the URANS modelling are determined using the standard two-equation k-ε transport model. In contrast, all three scales required by the LES modelling are based on the Smagorinsky subgrid scale (SGS) algebraic model. The present study proposes a new algebraic and a new transport LES model for the scalar dissipation rate required by the transport equation for scalar variance, with a time scale consistent with the Smagorinsky SGS model.