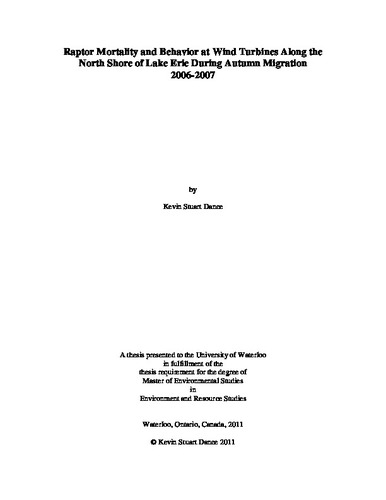 During 2006 and 2007 behavioral observations surveys of raptors were conducted at 12 turbines of a 66-turbine wind farm near Port Burwell, Ontario, Canada. Mortality surveys were conducted at all turbines in the wind farm with additional search effort at the twelve turbines where behavioral monitoring was conducted. The wind farm is located along a significant autumn raptor migration corridor along Lake Erie which is in the area of the Central Flyway. Only one raptor fatality was found each year at the 12 turbines used in the study, with one additional fatality found at the other 54 turbines in the wind facility. The estimated mortality rate for Erie Shore Wind Farm ranged from 0.028 to 0.049 raptor fatalities/MW/autumn. The estimated mortality rate for Erie Shores is at the low end of mortality for North American wind facilities outside of California, and which are not located in known migratory pathways. My findings suggest that the presence of high numbers of migrant raptors passing over a wind facility site does not automatically equate to high collision mortality. Over 5,579 observations of individual raptor passes within 250m of a turbine were recorded. The majority of raptors (73%) passed outside of blade sweep height. The majority of raptors avoided entering the risk zone of operational turbines with 2.92% (n = 159) of raptors observed passing within the risk zone of blade sweep height above ground and 0-40m out from the turbine base. The majority (73%) of raptors that entered the risk zone did so under conditions when risk was reduced due to turbine blade orientation in relation to the raptors’ direction of movement or when the turbine was not operational.