Impact of inserting a thiol methyltransferase gene on the competition between halide methylation and ethylene production in tobacco. 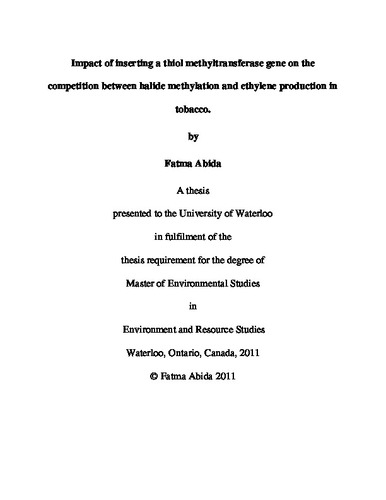 Plants are exposed to a variety of environmental stresses, ranging from insects and phytopathogens known as biotic stressors, to edaphic stressors including drought and salinity - clustered under the group of abiotic stresses. Facing these pernicious risks, plants have adopted several strategies to survive in stressful environments. With contemporary advances in technology and scientific research, it is possible to insert a specific gene or trait into a plant in order to confer salt tolerance. For example, a thiol methyltransferase enzyme in cabbage converts Cl¯ and other halide ions into their corresponding methyl halides, which are released directly into the air. Cloning the TMT1 gene and functionally expressing this gene into tobacco plants conferred salt tolerance on these plants. Although increased salt tolerance is a favourable and beneficial trait for plant productivity, the emission of methyl halides into the atmosphere can be noxious for the environment. Indeed, methyl halides are some of the factors contributing to climate change, widely believed to be the foremost environmental problem of the twenty-first century. Climate change is affecting all forms of life on earth and its impacts are often severe and irreversible. For that reason, it has been placed at the forefront of the international political agenda. The present study focused on two main physiological traits of stress resistance in tobacco plants which have been genetically engineered with the cabbage TMT1 gene: The production of methyl halides, particularly methyl chloride, as a way to confer salt tolerance; and synthesis of the stress hormone, ethylene. Both pathways share a common metabolite, S-adenosyl-L-methionine (SAM), for the synthesis of the final products. SAM, derived from the amino acid methionine (Met), is a universal methyl group donor. It plays essential roles in plant metabolism, by acting as a precursor for ethylene, polyamines, and vitamin B1 synthesis, and as a source of atmospheric dimethylsulphides. Therefore, it is important that the plant maintains the SAM pool at a level sufficient to serve all the different metabolic pathways. The present work set out to determine whether addition of another SAM-dependent pathway through TMT insertion in tobacco plants would negatively affect ethylene synthesis by lessening the amount of SAM available for ethylene biosynthesis. Detailed experimental studies were conducted, including in vitro and in vivo experiments, to examine the potential effect of TMT gene insertion on SAM availability for ethylene synthesis in tobacco plants. Three series of in vitro tests, differing by the number of leaf discs used, the final headspace volume in each flask, the incubation period in the different solutions and the time of introducing salt solutions, were carried out. Data obtained from two series of in vitro experiments revealed a decrease in ethylene emission when salt solutions were added at the beginning of the experiment and when leaves where incubated overnight in the presence of 0.1 M NaBr, coupled with the production of methyl halides, whereas the other series of in vitro tests as well as the in vivo results showed no alteration in ethylene accumulation because of TMT insertion when tobacco leaves were exposed to salt treatments. According to the results presented in this study, the amounts of available SAM in transformed tobacco are likely sufficient to serve both ethylene and methyl halides biosynthetic pathways. Besides, in vivo results indicate that inserting the TMT1 gene that improves salt stress resistance in tobacco should not dramatically alter ethylene synthesis, and therefore, would be unlikely to affect any physiological trait associated with ethylene production if this gene is used to engineer salt tolerance in high-value crops. Although TMT insertion does not alter ethylene emission in transgenic plants and tends to be an efficient tool to confer salt tolerance in halo-intolerant crops, its environmental cost is of great concern and, therefore, should be taken into consideration to mitigate the amounts of methyl halides emitted into the atmosphere because of this insertion.

Fatma Abida (2011). Impact of inserting a thiol methyltransferase gene on the competition between halide methylation and ethylene production in tobacco.. UWSpace. http://hdl.handle.net/10012/5795