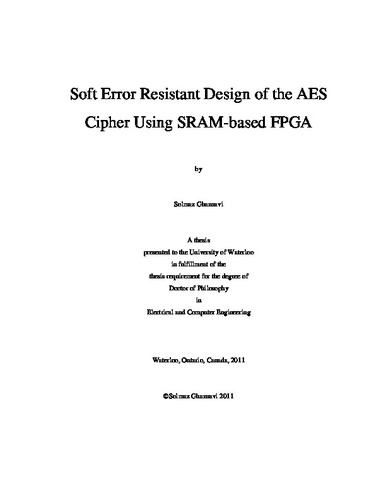 This thesis presents a new architecture for the reliable implementation of the symmetric-key algorithm Advanced Encryption Standard (AES) in Field Programmable Gate Arrays (FPGAs). Since FPGAs are prone to soft errors caused by radiation, and AES is highly sensitive to errors, reliable architectures are of significant concern. Energetic particles hitting a device can flip bits in FPGA SRAM cells controlling all aspects of the implementation. Unlike previous research, heterogeneous error detection techniques based on properties of the circuit and functionality are used to provide adequate reliability at the lowest possible cost. The use of dual ported block memory for SubBytes, duplication for the control circuitry, and a new enhanced parity technique for MixColumns is proposed. Previous parity techniques cover single errors in datapath registers, however, soft errors can occur in the control circuitry as well as in SRAM cells forming the combinational logic and routing. In this research, propagation of single errors is investigated in the routed netlist. Weaknesses of the previous parity techniques are identified. Architectural redesign at the register-transfer level is introduced to resolve undetected single errors in both the routing and the combinational logic. Reliability of the AES implementation is not only a critical issue in large scale FPGA-based systems but also at both higher altitudes and in space applications where there are a larger number of energetic particles. Thus, this research is important for providing efficient soft error resistant design in many current and future secure applications.