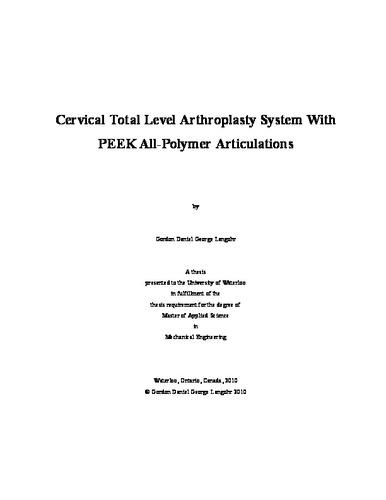 The cervical spine must provide structural support for the head, allow large range of motion and protect both the spinal cord and branching nerves. There are two types of spinal joints: the intervertebral discs which are flexible connections and the facets, which are articulating synovial joints. Both types degenerate with age. Current surgical treatments include spinal fusion and articulating disc replacement implants. If both disc and facet joints are degenerated, fusion is the only option. In spinal fusion, the disc is removed and the adjacent vertebrae are fused which causes abnormally high stress levels in adjacent discs. In disc replacement, an articulating device is inserted to restore intervertebral motion and mimic healthy spinal kinematics. Disc arthroplasty does not significantly increase adjacent level stress but the lack of rotational constraint causes increased facet contact pressures. Thus, there is a need for a cervical total level arthroplasty system (CTLAS) that has a disc implant specifically designed to preserve the facet joints and implants for facet arthroplasty that can act independently or in-unison with the disc replacement. The conceptual design of a CTLAS implant system was proposed that would replace the disc and the facet joints. To facilitate medical imaging, PEEK (polyetheretherkeytone) was selected as the structural and bearing material. In the present thesis, multi-station pin-on-plate wear testing was initiated for pairs of unfilled (OPT) and carbon-fiber-reinforced (CFR) PEEK. Wear is important in arthroplasty implant design because wear particles can cause osteolysis leading to loosening. A variety of experiments were performed to investigate the effects of load, contact geometry and lubricant composition on wear. CFR PEEK was found to have much lower and more predictable wear than OPT PEEK in the present experiments. The wear of OPT PEEK pairs showed sensitivity to lubricant protein concentration. The coefficient of friction during testing was found to be quite high (up to 0.5), which might have clinical implications. Also, some subsurface fatigue was found, exposing carbon fibers of CFR PEEK. This remains a concern for its long-term application. Further wear testing is recommended using actual implants in a spine wear simulator.