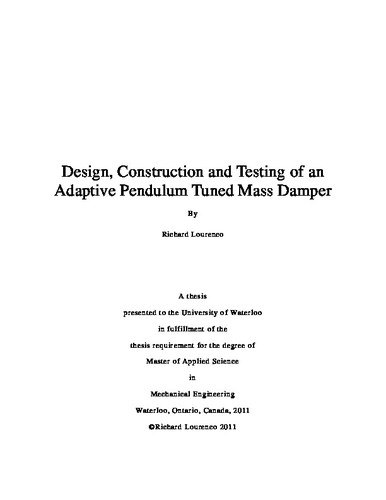 The objective of this thesis is to describe the design, construction, implementation and performance of a prototype adaptive pendulum tuned mass damper (APTMD). Furthermore the thesis aims at demonstrating the performance improvements obtained when the tuned mass damper (TMD) parameters are optimized. The study considers the effect of adjusting the APTMD tuned frequency and damping ratio on a two storey test structure subjected to broadband and narrowband excitation. An analytical model of the APTMD for a single-degree-of-freedom (SDOF) structure is used to demonstrate the performance improvements when the APTMD parameters are optimized. The optimized model considers the effects of adjusting the frequency ratio, damping ratio, and mass ratio of the combined system to reduce the maximum deflection when the structure is subjected to a harmonic excitation force. The analytical model is used to simulate the optimal performance of the APTMD system. The experimental APTMD is capable of identifying the structural vibration modes in real time and tuning to the desired mode. The structural vibration modes are identified by calculating the windowed power spectral density of the structure’s acceleration, followed by peak-picking algorithm to identify the modal frequencies. Tuning is performed by moving the pivot location of the pendulum arm via a tuning frame along a set of rails. The design also allows for changes in the external dampening force. An adjustable damper is attached to the pendulum mass to allow for control of the APTMD damping ratio. A prototype of the APTMD is built and tested in a modal testing setup. The test structure is a two-storey model of a building structure. The structure is excited using a shaker fixed to the lower storey of the structure. The performance of the APTMD under broadband and narrowband excitation is examined for various tuning and damping parameters. The performance of the APTMD system under optimally tuned and detuned conditions is investigated. The results of the experimental studies demonstrate the importance of optimizing the TMD tuned frequency and damping ratio to reduce structural vibrations. Since the APTMD is designed to autonomously update both parameters, it is an effective tool in mitigating structural vibrations where user interaction is either difficult or expensive. Further study on the performance of a prototype APTMD applied to a large scale structure is required before implementation on full-scale structures.