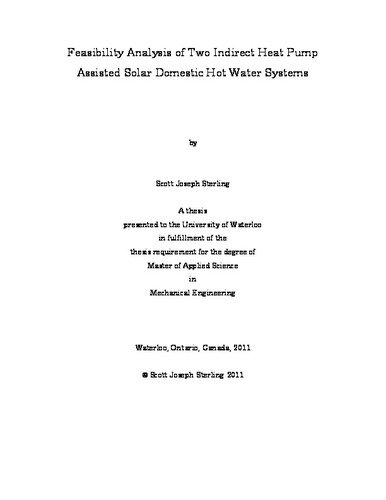 This thesis is an analysis of the simulated performance of two indirect heat pump assisted solar domestic hot water (i-HPASDHW) systems compared to two base systems: an electric domestic hot water (DHW) system and a traditional solar domestic hot water (SDHW) system. In this study, the four systems of interest were modeled in the TRNSYS software and simulated for a year in order to compare their performances. All of the systems had the same load profile and aimed to deliver domestic hot water at a constant temperature. This insured that each system delivered approximately the same amount of energy for the simulated period, thereby creating a common basis for comparison. The heat pump was introduced into the system configuration in an attempt to further improve the performance. Theoretically, the heat pump should send colder fluid to the collector which will extend the solar collection periods, both daily and seasonally when compared to the traditional SDHW system, as well as increase the efficiency of the collector. This will help to reduce the reliance on the electric auxiliary heaters and thus decrease the total electricity consumption. Both i-HPASDHW systems considered for this thesis collected more solar energy over the course of the simulated year compared to the base traditional SDHW system. They also consumed less electricity than the two base systems, which directly correlated to lower annual operating costs. It was concluded that the two i-HPASDHW systems analyzed in this study proved to be feasible configurations that performed more efficiently than the two base systems under the simulation conditions. However, it is important to understand that the results presented apply to the specific configurations. While the potential has been shown, prototypes must be built and tested with properly sized equipment for specific applications to get an accurate idea of the potential benefits. Also, equipment costs must be considered to determine payback periods for each system.