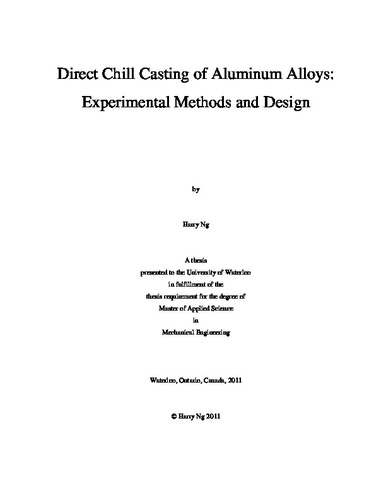 Novelis Global Technology Centre (NGTC) in Kingston, Ontario have been developing a relatively new technology known as Novelis Fusion™ Technology, which is a new variant of the traditional direct chill (DC) casting process that allows co-casting of multi-layered composite aluminum alloy ingots. One of the first steps in this development program is to create a mathematical model of conventional DC casting and validate it through experimentation before proceeding to the next step of modeling, designing, testing, and experimenting with the co casting process. The focus of this document is on the design of the experiments, measurement technique, and analysis of the experimental results to be used to validate the models for conventional DC casting. A series of experiments was conducted using a lab scale caster using a 95 mm × 227 mm rectangular mould available at the Novelis Global Technology Centre in Kingston, Ontario. AA3003, AA6111, and AA4045 aluminum alloys were chosen for this study since these aluminum alloys are commonly used in clad products. Two series of experiments were performed to investigate the effect of casting parameters on the solidification and cooling of the ingots such as casting speed, water flow rate, and the superheat of the molten aluminum. A set of seven thermocouples were embedded in the ingot during the cast to capture the thermal history of the ingot. Melt poisoning with a zinc rich alloy was also performed as an independent method of determining the sump depth and shape. Experienced gained from the first series of experiments allowed improvements to be made to the experiment design for the second series of experiments. Thermocouples must be supported so they are not pushed out of position by the jet of molten aluminum entering the mould. Grounded thermocouples of at least 1.5 mm in diameter were recommended to survive the high temperatures of the molten aluminum. Knowledge gained from the experiments of the conventional DC caster allowed design and development of an experimental co-caster mould that will be useful for future research at NGTC. Melt poisoning and thermocouples were complementary measurement methods that should be used together. In all three alloys, the liquidus sump profile generated by the thermocouple implants correlated well with the etched sumps of the melt poisoned ingots. Primary and secondary water flow rates beyond 1.79 L/s and increasing the superheat by 30°C did not have significant effect of the cooling rate with solidified ingots, but all casting experiments showed that the thermal histories and sump profiles were very sensitive to the casting speed. The sump depth increased with increasing casting speed in all casting experiments. The sump depth increased directly proportionally to the Péclet number and the sump depth could be predicted using a linear regression model by calculating the Péclet number. The formation of remelting bands were seen in the surface of the AA3003 and AA4045 ingots, but were not apparent in the AA6111 ingots. A fast Fourier transform performed on the data obtained from the thermocouples that were inserted in the mould wall showed that remelting occurred at regular intervals and that the frequency increased with casting speed. The thermocouples in the mould also indicated that AA6111 had a higher rate of heat transfer than AA3003 or AA4045. The AA6111 ingots had a higher rate of heat transfer in the mould than for the other alloys. This was evidence that there was a smaller air gap formation between the ingot and the mould in AA6111. This research on the effects of casting parameters on DC cast ingots made using the three alloys, AA3003, AA6111, and AA4045, is beneficial in the development of a design of an experimental lab-scale co-caster for validation of a computational fluid dynamics (CFD) model of the Fusion™ Technology process.