Butterfly Abundance and Diversity Along an Urban Gradient in the Region of Waterloo, Ontario, Canada 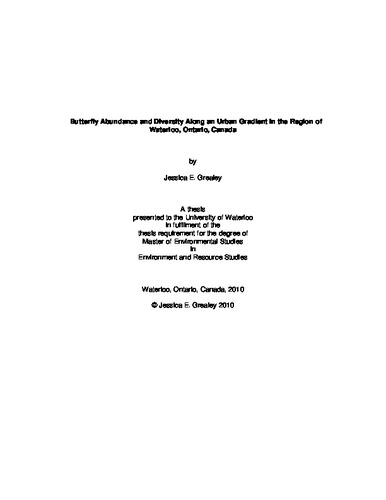 Conservation biologists often use biological indicators to measure and monitor changes in biological diversity. This study examines butterflies as indicators using a gradient-based study approach. The urban gradient was characterized by Environmentally Sensitive Policy Areas (ESPAs), urban parks, golf courses, residential areas, and industrial areas. This thesis has been divided into two separate chapters. Chapter 1 summarizes an extensive review of existing data on butterfly presence/absence in the Region of Waterloo to determine what species are relatively uncommon or rare in the Region and examine how butterfly presence/absence has changed over the last 80 year. Each butterfly species that occurs in the region was assigned a regional status which resulted in the identification of 46 uncommon and rare species. Chapter 2 examines changes in butterfly abundance and diversity along a gradient of urbanization to determine how different land uses are potential affecting butterfly communities. Transects, 500 meters in length, were established at fifteen sites, each of which represented a land use within the urban gradient identified. Each transect was walked once a week for a total of 28 weeks over two years (2009 and 2010). Overall butterfly richness was observed to be highest within ESPAs, followed by urban parks and industrial areas and lowest within golf courses and residential areas. Shannon diversity scores were compared using a Kruskal Wallis test and indicated that species richness and evenness was significantly different between ESPAs and urban parks and compared to the remaining land uses, while species richness and evenness was not significantly different among residential areas, golf courses, and industrial areas in either 2009 or 2010. Significant differences in species richness and evenness was observed across the same land uses in 2009 and 2010 for all types except residential areas. Overall butterfly abundance was observed to be highest in industrial areas and lowest within golf courses and residential areas, a trend which was observed in both 2009 and 2010. Abundance was observed to be heavily influenced by counts of two non native species- the cabbage white (Pieris rapae) and European Skipper (Thymelicus lineola). ESPAs were identified as 1) supporting the most diverse butterfly community out of the 5 land uses examined and 2) providing habitat for the highest number of rare and uncommon species, indicating that current regional policies in place for protecting rare species are effective. Through an extensive literature review it was concluded that butterflies are effective indicators in temperate regions within a small geographic area such as the Region of Waterloo. Therefore it is expected that the results of this study indicate how other terrestrial taxonomic groups, which are known to show a similar response to urbanized land uses, may be impacted by urbanization in the Region. It is anticipated that the results of this study may be used to guide urban land use planning as it identifies rare and uncommon butterfly species within the region as well as what land uses need habitat enhancement to support more diverse communities.

Jessica Elaine Grealey (2011). Butterfly Abundance and Diversity Along an Urban Gradient in the Region of Waterloo, Ontario, Canada. UWSpace. http://hdl.handle.net/10012/5742