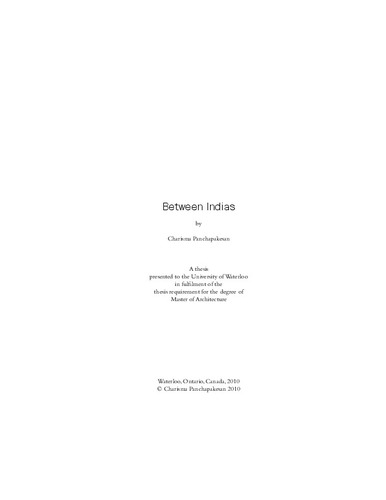 Cultural identity today has become deterritorialized. As mass migration, mobility and interconnectivity between peoples and regions have increased, connections to geographical roots have loosened. People today are enmeshed in multiple spatial contexts, their past and present associations all contribute to shaping an identity that reaches beyond territorial boundaries. Being simultaneously a part of and apart from a multitude of places allows for identity to be situational and hybrid, between categorization. To examine the fluidity of identity and its relationship to the built environment, this investigation focuses specifically around the Indian diaspora, tracing the relationship between people and place within their homeland, through transition, and after settling in a new hostland. While definitions of nationalism typically involve identifying ethnic commonalities within a state, the Indian nation unites in a celebration of disparity. As India developed as a home to numerous languages, social hierarchies and belief systems, it has struggled to form a coherent national narrative. The overseas Indian community amplifies this dilemma as they are confronted with further multiplicity in a foreign environment. The result is a gap that prevents the Indian diaspora from fully connecting to both homeland and hostland, situating them in a space of the in-between. Rather than attempting to bridge this gap, this investigation chronicles the reasons for its existence and offers an observatory as a space in the built environment where the gulf between cultural identities can be explored.