It's not Just Food, Sustainable Food Security for Immigrants: Barriers and Opportunities 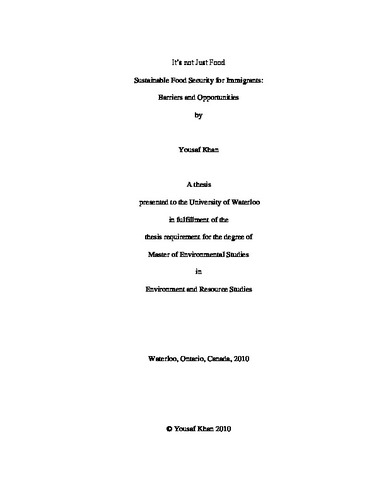 Despite enough food production to feed everyone on the planet, there are 850 million people around the world who are food insecure. This includes people in developing and industrialized countries. Food insecurity may not be just “not having enough amounts of food” but “not having food that is appropriate according to culture and religion”. The global agri-food system has restricted access to food and resulted in environmental damage by displacing family farming, and leading to the establishment of industrial monocultures. Canada, being a multicultural society, has immigrants from around the world with different ethno-cultural backgrounds and religions. This study takes a different perspective on food insecurity by linking food to culture and religion and the food system. The study has devised criteria based on sustainable food security criteria developed by Lima (2008). The criteria include physical and economic access to food, religious and cultural adequacy of food and the food system’s environmental and social effects. The criteria were applied to the case study of Waterloo Region by examining existing policies and initiatives to address food insecurity in the Region. The case study analysis explores barriers and opportunities to foster sustainable food security for immigrants in Waterloo Region. The case study includes an embedded case study of South Asian Muslim community of immigrants in Cambridge, Waterloo Region. The analysis of the case study findings reveals that in most cases the current food system of Waterloo Region is largely industrial and contains major gaps in fulfilling the criteria of access, sustainability, social justice, and cultural and spiritual attitudes. This food system only partially meets or even fails to meet the criteria. As evidenced in the case study, current governance arrangements to address the issue of food insecurity result in exclusion of immigrant populations. The issue goes beyond food and emerges in other planning decisions like the allocation of public spaces. Finally, this study recommends broader multicultural policy at the regional government level to include the issues of immigrants.