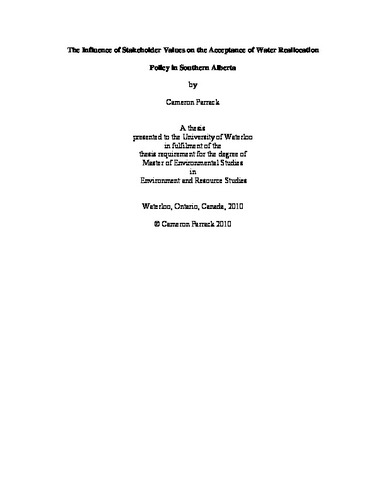 Historically, a great deal of water has been allocated to the agricultural sector in Alberta to support economic development and to contribute to food security. However, demand from other areas has increased in recent years, notably from the environment. Meeting new demands while still satisfying existing users has become a significant challenge. The combination of increased water use efficiency and productivity combined with reallocating water from agriculture to other sectors has emerged globally as a solution to this challenge. Thus, new policies regarding water reallocation need to be developed. Designing policies that are acceptable to the various stakeholders involved poses a considerable challenge. The values held by individuals determine how they will react to new public policies. Hence, to support effective policy making, a better understanding of how the non-irrigator population perceives water reallocation issues is necessary. Using mail-out surveys to collect data from the populations of Lethbridge, Alberta, and the surrounding smaller communities, this research aimed to identify the values regarding water allocation held by domestic, non-irrigator water users, and to determine how these values influence their acceptance of water allocation policies. Findings from the survey reveal how non-irrigators’ values influence their opinion of water transfers from the irrigation sector to the urban and environment sectors, and the conditions under which they should take place. A pro-environment value orientation was most prominent amongst the urban sample, while the rural sample was mainly moderate in their value orientation. The large moderate value cluster within the rural sample represented both pro-economic and pro-environment values depending on the focus of the survey item. Statements that would affect the community (irrigation sector) were met with pro-economic values while statements that involved making a personal sacrifice in order to protect the aquatic environment were strongly supported. Value orientation was found to greatly influence the respondents’ perception of water reallocation policy.

Cameron Parrack (2010). The Influence of Stakeholder Values on the Acceptance of Water Reallocation Policy in Southern Alberta. UWSpace. http://hdl.handle.net/10012/5679