Experimental Analysis and Computational Modeling of Annealing in AA6xxx Alloys 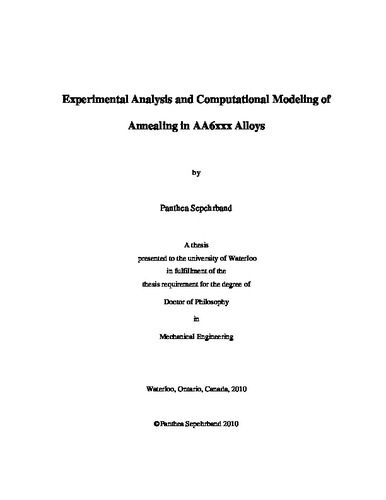 Microstructural evolution in a naturally-aged and cold-rolled AA6451 aluminum alloy during a non-isothermal annealing process, which leads to significant grain refinement, is investigated through: (a) conducting a comprehensive experimental analysis and (b) developing a computational modeling technique. The underlying mechanisms of annealing have been investigated through analysing interactive phenomena between precipitation and concurrent recovery and recrystallization. It is shown that the interactions between solute elements, clusters, and fine precipitates with dislocations restrict dynamic and static recovery during deformation and subsequent annealing. Inhibition of recovery favours recrystallization that initiates at 300oC and progresses through a nucleation and growth mechanism. Despite localized inhomogeneities, nucleation mainly occurs in non-recovered high energy sites which are uniformly distributed within the entire structure. Growth of the recrystallized nuclei is restricted by pinning precipitates that undergo a concurrent coarsening process. The fine, uniform distribution of recrystallized nuclei and their limited growth result in the formation of a fine-grained microstructure, after completion of recrystallization. The acquired knowledge has been used to develop a computational modeling technique for simulating microstructural evolution of the alloy. Microstructural states are simulated by integrating analytical approaches in a Monte Carlo algorithm. The effects of deformation-induced and pre-existing inhomogeneities, as well as precipitate coarsening and grain boundary pinning on the competitive recovery-recrystallization process are included in the simulation algorithm. The developed technique is implemented to predict the microstructural evolution during isothermal and non-isothermal annealing of AA6xxx sheets. A good quantitative agreement is found between the model predictions and the results from the experimental investigations.